Last week, I received such fun responses to my original fancasting for my first novel, The Awakened, and I really appreciate that! You guys are awesome. Today I wanted to talk a little bit about the two main characters of my newest novel, Legacy. If you haven’t already, you can read the synopsis and the prologue by checking out the first Novel Share Saturday here.

Emery McKenna is the main character of Legacy. The book opens up on her eighteenth birthday. She’s a normal teenager, or at least she strives to be. She’s been told stories her entire life about how she is from a long line of Dragon Riders, women who rode the skies on the back of winged beasts, and ruled Ireland. When she’s young, these stories are, of course, fascinating to her but as she grows older and receives absolutely no answers as to where the heck the dragons are, she loses her interest. Her mother, Maggie, constantly tries to impress upon her how important it is to live up to her family’s legacy but since there are no more dragons and no one tells her what happened to them, she doesn’t care. Its hard to live up to a legacy that doesn’t really exist anymore.

I’ve been wanting to write this story for awhile and the name Emery had been sitting in the back of my mind for a long time. I didn’t really know I was going to make this an Irish story until I started writing and it sort of came out that way. After that, I did some research on Irish last names. I wanted it to sound Irish but also not be too Irish and I really hope I accomplished that with McKenna. I am super attached to that last name so I really don’t see that changing. I do have a tendency to change names but I’m really attached to Emery McKenna.

What I really want for Emery to be is a reluctant participant to the story. We read so many stories about characters who are thrust into this new world and learn to embrace it and are wowed with everything they discover and its okay, because that story totally works. I just wanted to try something different – a girl who grew up knowing that she was supposed to be a part of something special that once existed but wanted nothing to do with it. Of course, secrets are revealed and she’s forced to become a Dragon Rider, but she’s very, very reluctant about it. If she had a choice, she wouldn’t choose it.

I’ve thought a little of fancasting when it comes to Emery, and I couldn’t really pinpoint someone – all the redheaded actresses I could think of were too old to be a teenager Emery. It was happenstance, scrolling through instagram, when I came across Ellie Bamber and she immediately was, yes, this is Emery. Emery has red hair, brown eyes, freckles. She’s strong, plays softball and is born from strong women. Ellie has light eyes, whereas Emery does not, but I still think this is accurate to what I picture in my mind.

There is not much I can say about Pippa just yet because Pippa is a character that brings a lot of truth and reveals a lot of secrets to Emery and because of that, much of her is still a secret, even to me. We’ve only just met her in my draft but she’s such an integral part of the story and an integral part of Emery’s journey, not only as a Rider, but also as a person. She makes Emery question her family, her past, what she’s been told for years and she makes Emery question herself and what she think she knows about herself.

The character of Pippa was actually  originally a male character named Ian but it just didn’t work in original drafts and stories. I’ve been wanting to write a F/F fantasy story for quite some time but I never wanted to force it, never wanted to write diversity for the sake of diversity, because I feel the story doesn’t feel as genuine at that point. I wanted it to feel natural. Once I changed Ian to Pippa and then wrote the scene where Emery met Pippa…it just clicked to me. They had way more chemistry on the page than Emery ever had with Ian and I’m happy I made that choice. Pippa is Irish, with dark dark hair and light eyes, and she is a warrior, built strong. She’s whip smart and confident and she’s dedicated to her family.

I immediately knew who I pictured in my head for Pippa as soon as I created the character in my mind. I was binge watching Supergirl and fell in love with the actress, Amy Jackson, who makes a brief appearance on the show as Imra/Saturn Girl. There is something about the way that she plays that character that really hit the mark to me as Pippa and so she is who I picture. She’s a little older than Pippa would be but I still think that she would work really well. 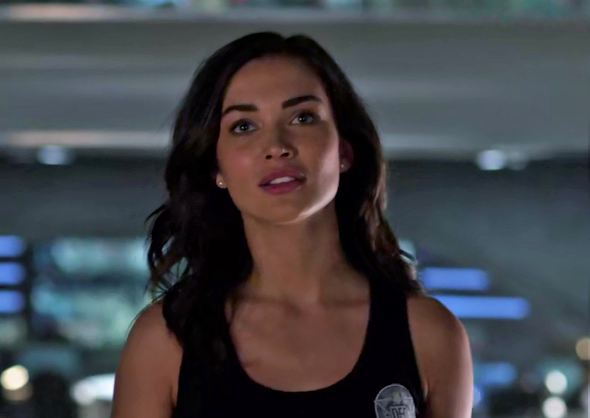 Over time, I really want to introduce more characters to you – like the dragons! – but for now, I just want to share the two near and dear to my heart when it comes to this project. I have so much hope for Emery’s story and I am full of so much love for Emery and Pippa as a pair. Hopefully one day, this story will be published and you guys will agree!

Until then, Happy Writing!