For those of you who may not know, I recently came up with a list of 40 things I want to do before I’m 40 years old. I turn 32 in about a month so that’s 8 years to accomplish these things and I think I can do it. One of those things is watching the entire Disney animated catalog from beginning to end, which is a serious undertaking. It has been made SOOOO much easier since the beginning of Disney+ – at least I have access to them now! I’m planning on writing little short reviews in chunks, five to six movies at a time, so hold on tight, let’s do this!

Last time I watched this movie, I didn’t love it that much but honestly, I’m beginning to think I didn’t appreciate it. To be fair, its been quite a many years since I’ve watched. Now that I watch it again at 31 years, I’m really impressed at the kind of animation that Disney was able to achieve in 1937. Its no wonder that this movie is so iconic. You can obviously tell that its nearly 100 years old (omg) but genuinely the animated is so great and so beautiful to look at. Its truly just an amazing piece of artwork. I remember also thinking that Snow White’s voice was sort of high pitched and warbling but it doesn’t seem like that anymore at all. The music in the movie is truly phenomenal and its no wonder that it was nominated for Best Original Score at the Oscars. Its also so fast paced but not in a way that makes you feel as if the movie is rushed. With the average length of a movie nowadays topping out at 2 hours or more, it was kind of nice to get a complete story in less than an hour and a half.

I didn’t immediately go into this with a good mind because really, all my memories of this movie stems from the ride at Disneyland and that ride does not seem like a children’s ride, it seems absolutely terrifying. The movie moves at a breakneck pace and it all seems to be happening so fast. Like, Pinocchio is created and then goes to school and then gets involved in the show and then goes to Pleasure Island all in, like, less than 24 hours. Its total emotional whiplash. Its still not one of my favorites but wow, what a story. Its so dark and the entire Pleasure Island scene seriously was…outed and so inappropriate for a children’s movie haha. The cigar smoking and the beer drinking was crazy! The music is, as always, fantastic but wow. Its amazing what they got away with in movies back then.

I feel SO bad when it comes to this movie because it is so iconic and its where we get Sorcerer’s Apprentice Mickey, which is kind of the best BUT seriously…I’m always bored watching this. The music is so beautiful and the animation is truly gorgeous and I love how it matches with the music and tells stories but its just so hard for me to watch. I really admire the chance they took with a movie like this back then and genuinely its so absolutely gorgeous but maybe its just not my style. I’m heavy into great dialogue and great storytelling that has me wondering what is going to happen next and this is more of a complication of stories and so it just is harder for me to watch. There is still a huge soft spot in my heart for Yensid and the Sorcerer’s Apprentice and all of that. Its just pure classic Disney. 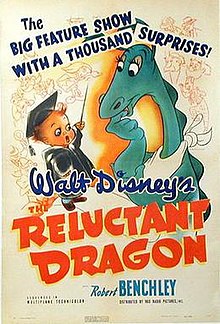 This is one movie that was actually totally brand new to me. I knew OF it, mostly because of Starkid and A Very Potter Musical’s reference to it but genuinely, no idea. Its just not one I’ve ever watched. So when most of the movie ended up being NOT animated, it really threw me off, like, wait a minute, is this an animated movie? It was on the list? Where on earth is the dragon? But despite the interesting way that it started, I genuinely totally loved this movie. Seriously. It was so funny and it was like this backstage pass to old school Disney studios as the main character tried to make his way to Walt Disney to pitch a movie, The Reluctant Dragon. The Disney nerd in me thought that this was fantastic and I truly enjoyed that part. I loved the little black and white animated short we got in the middle about the super smart baby and then when we did get to the Reluctant Dragon, I was dying, it was so funny, flamboyant and peaceful Dragon was just perfect and the knight was funny. I’m so glad to have discovered this one in my watch because I don’t know if I’d ever would have just sought it out and it was so great.

I haven’t watched this movie in quite some time because the last time I watched it, I FELT it and it just felt sooo heartbreaking. And like, I’m not even talking about the part where his mother sings to him and rocks him through her cage. Its definitely sad when he’s alone and the other elephants are making fun of him but it was the bullying that always got to me, the way everyone laughed at him. It always made me cry so much – it was SUCH a sad movie. Watching it now though, I enjoyed it so much more. There are definitely serious sadness to it and there’s also the weird feelings I get about the circus because the circus is just so bad but it was really sweet and uplifting. The crows are still racist but I’m okay that they didn’t take them out…they recognize the times and don’t want to erase that history. The pink elephants scene is still just as terrifying as when I was a child and also like, how is this baby elephant and mouse getting DRUNK right now, this is insane. But its a short and really sweet story, especially once Dumbo gets all famous and is reunited with his mom. I’m in a seriously baby mood lately – time clock is ticking or something – and so the baby loving his mom so much was just too much for my emotions to handle.

This was another movie I hadn’t watched in ages because I was afraid of being incredibly sad by Bambi’s death. And don’t get me wrong – its definitely sad. Like, wow, its so sad. But its not as bad as I remember and I think its because, like these other movies, they are a breakneck pace and it takes place much further into the movie than I remember. Honestly, I was more focused on the beautiful, gorgeous animation and the beautiful music that comes along with the story. Honestly, if you just put aside that, yes, Bambi’s mom dies, its actually just such a beautiful story and I loved every bit of it. I was actually super happier watching this than I think I’ve ever been in the past. Its a story of family and friendship and first love and the changing of the seasons and first discovery and honestly, I just loved every bit of it. I think it definitely rose in my list of my favorite Disney movies, if only for the animation and music!

Have you seen any of the above movies? What are you thoughts on them? Share in the comments!

3 thoughts on “40 Before 40: Watching the Entire Disney Animated Catalog – The First Six Movies”