Well, hello there my friends! Hope you guys are all having a great week, and you’re reading lots and watching good movies and good shows, and you’re just all happy.

I am definitely happy. I know I’ve been a little MIA the last few days, I was very busy with a Conan taping and the Percy Jackson premiere (more on that later!). But today, is August 1st! Do you know what that means? Oh god that means A LOT. New books by Tammara Webber, Rae Carson, Pittacus Lore, Sarah J. Maas and Jennifer L. Armentrout to begin with. The new Harry Potter 15th anniversary box set. And then…CITY OF BONES FINALLY HITS THEATERS!

But until then, I have a really great book to share with you guys today, so check out this week’s Book of the Week! 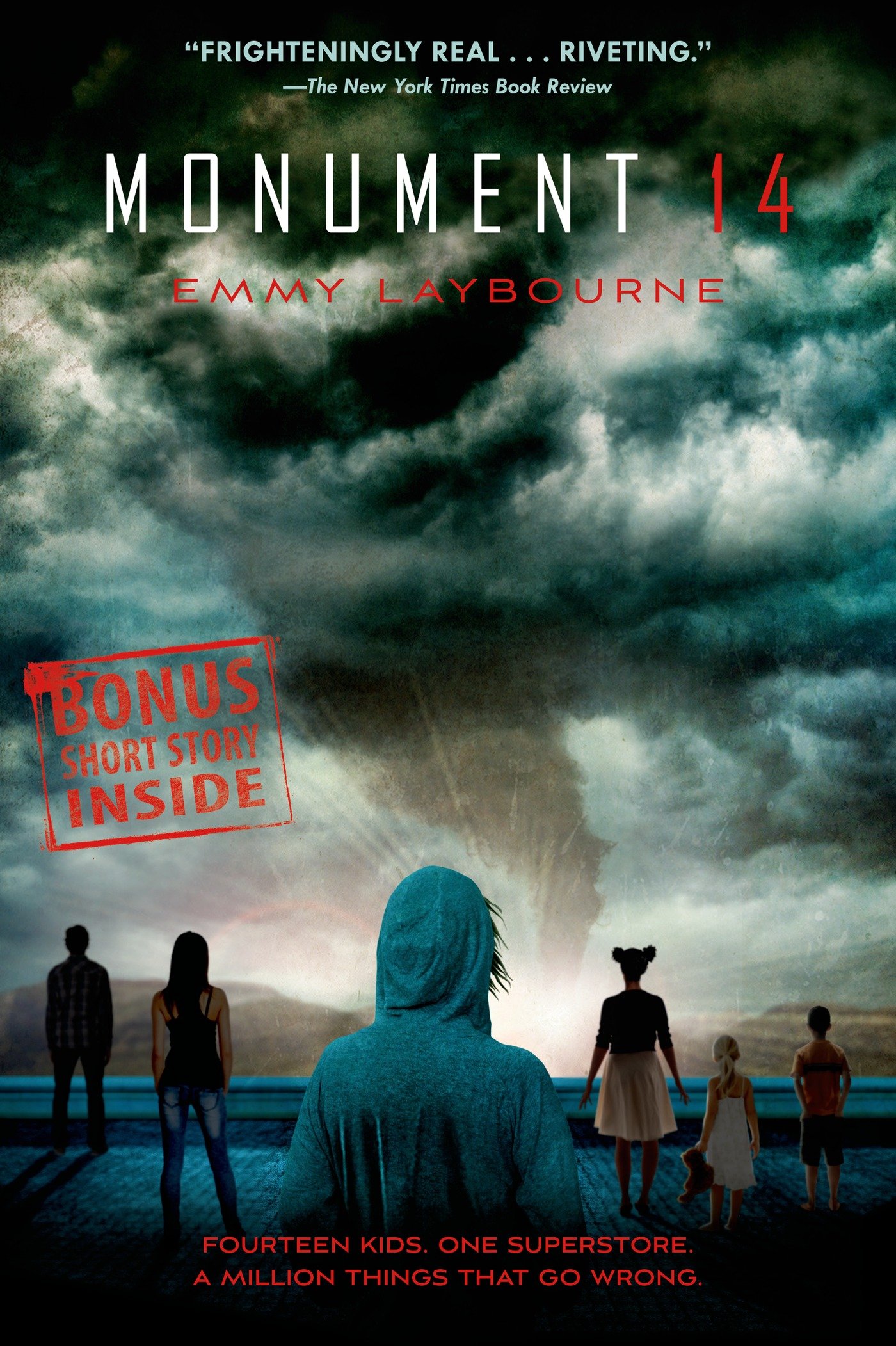 Part of a Series?:
yes, the second book, Sky on Fire was released this year.

You May Like if You Liked:
Struck by Jennifer Bosworth, Quarantine by Lex Thomas, Dawn of the Dead (movie)

In my personal opinion, its the YA equivalent of Dawn of the Dead…but without the zombies, at least as far as I’m aware.

Dean leaves for school, like any normal day. He jumps on the bus to high school, with his 8th grade brother, Alex, on the bus behind him. The busses are making their way to school when a suddenly storm hits, with hail at abnormal size. The bus driver loses control and the bus goes crazy, flipping, and killing some of the students on board, and tearing the bus to pieces, while hail starts to hit more students. The bus driver of the junior high/elementary school bus comes to rescue them, and they take rescue in the nearest Greenway, which is basically the fictional equivalent of Costco.

The bus driver goes in search of help, leaving Dean and his fellow high school students that were on the bus (Jake, Brayden, Astrid, Josie and Nico), in charge of the two eighth graders, Alex and Sahalia, and a half a dozen kindergartners. When it becomes clear that the bus driver is not coming back, they have to take it in their own hands to survive, especially when their mini-pads (the book is SLIGHTLY dystopian) are off and they can’t communicate with anyone and the store has full, closing doors that prevent people from getting in…or out.

Dean isn’t a leader, he writes (in a world where pens aren’t used much anymore), and reads, and pines for Astrid from afar. But he has to band together with these people that he either doesn’t know or doesn’t really like to survive, especially when more and more things begin to happen.

Moving on though, the female characters in this novel did bother me a little. Astrid seems like she’s going to be a strong character, but isn’t, and her…state at the end of the novel kind of pissed me off. Sahalia was soooo annoying; her obsession with being noticed by the boys, and her pushing herself on them, putting on a white shirt and getting it all wet, and all of that, it was so…one-dimensional. I was not happy with her storyline either.

I did like Josie, which I’ll go onto later.

The end…I liked the end, because it kind of leaves you hanging, having to read the next book (which I haven’t gotten my hands on yet) and that was great. But I didn’t like Astrid’s state at the end, and I wasn’t a fan of Dean’s, as well.

It sounds like I didn’t like this book, when that’s actually the furthest from the truth. Despite my distaste for Astrid and her storyline, especially since it seems that she will be even more important in the sequel, I really enjoyed this novel, and I was disappointed when it ended because I wanted to keep reading.

With the obsession with zombie apocalypses and just good ol regular apocalypes, people are always making plans on what they would do in the event that it did happen, whether they are kidding or not. I’ve always thought that Costco would be a really great place to be stuck. Think about it: Costco literally has EVERYTHING. It reminds me a lot of Dawn of the Dead, where they are holed up in a shopping mall, another place that pretty much has everything. It seems like the ideal place to try and survive in a world that we’re fairly familiar with. I’m sure that I’m not the only person who has thought of this.

So Emmy Laybourne takes this idea and uses it, with teenagers and children, banded together to survive, when the day before, that wasn’t a concern; it was the concern of their parents. It was interesting to watch the dynamic that comes from that, how the original leader is the one who was the leader on the football field, but how he doesn’t really translate into a leader. Its interesting to watch who falls apart, and who steps up, how they divide labor, and how they plan on using the resources left to them. They are CHILDREN and they’re handling this stuff, and its kind of addicting because who knows when any of us will ever have to survive something of that kind of nature. I think of myself at 16 and I know I would have probably just fallen apart, and let myself die. Now? I’m hoping I’d be a lot better.

I also like that Dean is the main character. He’s not a hero, he’s not the leader but he’s not the bad guy either. He’s just kind of in the middle, observing and doing only what he’s told or what he knows he is capable of doing. He doesn’t agree or disagree with anyone, and he just sort of gets by. I like that about him. I like that he doesn’t immediately step to be either the hero or anti-hero. He’s living it, trying to survive, trying to take care of his brother, and I think that’s what majority of people would be, and this is the character that most people would relate to. His brother Alex is a technology genius and Nico is a natural planner and organizer and Jake commands a presence that Dean can’t. Dean is the average Joe, but you love him for that. You understand that.

I don’t want to give away too much about it, but its a great story of a bunch of kids surviving in a store, not knowing at all what is going on outside, and struggling to build their own little community, despite all that. Its a beautiful story, and a compelling one that keeps you pretty glued to the pages until the very end. And then the end makes you want the sequel super badly, even though you’re a poor college student who can’t buy new books as much anymore and the library doesn’t have the sequel…

Definitely. I really liked the book, and despite my issues with Astrid and Sahalia, I think it was a wonderfully written book and it was a breath of fresh air. We’ve seen apocalyptic books, but most involve zombies, and the few that are more natural based tend to still involve adults in some way. But I like how this book focuses on the survival of teens and kids, without the influence of adults and how they try to build their own little society. Way to go, Emmy, you’ve made a fan in me :)

Thanks for checking out this week’s Book of the Week post! I hope that you enjoyed it, and definitely check out previous ones!

And don’t forget to check out Kat’s review of Angelfall by Susan Ee!

2 thoughts on “Book of the Week-Monument 14”