Welcome back to the Book of the Week, in its new day, Thursday! I changed the outline of my blog a little bit and moved the Book of the Week from Friday to Thursday. Okay, and I am totally aware that is neither Thursday nor Friday and I’m already doing seriously horrible at sticking to my blog outline. I’m trying to do better though and its been kind of a busy week.

But moving on. I am on a reading high right now, trying to make my goal of 200 books in a year and so far, I’ve read 11 books this year, which isn’t too bad considering its mid-January.

So it actually was kind of hard to pick a book for a book of the week.

However, I was reading the sequel to this week’s book of the week and I realized how much I enjoyed the story and I wanted to talk to people all about the sequel. Well, I can’t really do a post on the sequel of the novel without first talking about the first story. So here is this week’s Book of the Week. 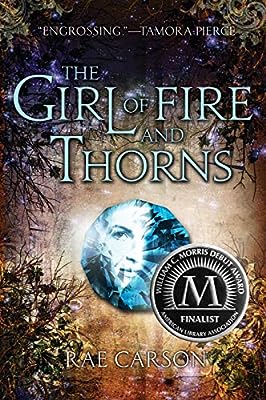 So the basic premise of the novel is this: Elisa is a princess in the country of Orovalle, the younger sister, with no real purpose and no direct line to the throne. She isn’t beautiful; in fact, she enjoys her food a bit too much and is known for being a very kind princess but a very FAT princess. To make matters worse, she is married off to Alejandro, the king of the near by desert country of Joya d’Arena, in secret. Alejandro is gorgeous, and his son adores Elisa but she’s in a loveless, secret marriage and she feels even more useless than she did in her own country.

Because Elisa has a destiny, a destiny given to her from God in the form of a Godstone, a blue stone in her stomach, visible through her navel that makes her as a chosen one, one who will do somehing great as the will of God. This, of course, makes her a hot commodity, and only puts a SLIGHT bit of pressure on her.

And then she is kidnapped by a group of kids her own age, who live in the eastern areas of the Joya d’Arena , where war has raged for generations, unknown to the weak king, Alejandro. They hope by bringing God’s chosen to their cause, they will finally be able to defeat the Invierne army that threatens the entire kingdom. Finally, Elisa feels like she has a purpose…and a boy named Humberto, who looks at her like no one else in the world ever has.

The Good or the Bad:

First, I’m going to start with the bad, because there isn’t a lot. The biggest “issue”, if you will, for this book was the God aspect of it. In a lot of fantasy novels that are written, there is some form of religion. It only makes sense because religion is the way we explain how things happen, how we came about. Its where we get our morals and our “rules”, where we came from. It only makes sense that gods would exist in these alternate universes. However, with Elisa’s Godstone and her destiny from God, and all that, it got a little too religious for me. I’m an atheist and can only handle a little bit of religion and I had a hard time determining if it was the God of a fantasy world or if it was a book with heavy Christian values. I’m not a Christian so heavy Christian themes in a book is hard for me to stomach. Its why I have such a hard time reading the Chronicles of Narnia, but I love Harry Potter.

Moving on though, the rest of the book is absolutely fantastic.

First (you know, besides the first ‘first’ that talked about religion), there’s the character of Elisa herself. She is a wonderfully written character. Tamora Pierce, one of my absolute heroines, says “Elisa is a wonderful, believable hero, the kind that every reader can imagine as herself.” This is a perfect way to describe Elisa. She’s a younger princess, getting married to this extremely handsome king on her sixteenth birthday, and she’s a born Chosen one from God, and she’s fat. She’s insecure in her own body and her own destiny and she’s forced to marry an extremely handsome king, who has no interest in actually recognizing her as his wife. She feels like a child and she feels useless. How many of us have felt that? If you haven’t felt that, you must be a robot.

But of course, Elisa doesn’t always stay this timid and afraid little girl. She becomes an adult, though through trial. She’s kidnapped by people who need her help, because she is the Chosen. And even though she feels completely inept and she has no clue whatsoever what the Godstone and its purpose is for her, she is able to help. And the best part of her stepping up and helping, and gaining the confidence to lead these people, is that it comes from herself. It doesn’t come from her Godstone. The Godstone may have been the reason that she was brought into this but it isn’t what makes her the great leader that she is. It isn’t what gains her the loyalty of those people, it isn’t what causes the friendship she gains in her guard, Hector, the adoration she wins from her new son, Rosario, and the love she gets from her friend, Humberto. That is all 100% Elisa and its fantastic.

There’s the story itself, that captivates me enough to keep reading. You can’t help but want to root on Elisa the entire time. Even though Alejandro is a weak king and he rules his kingdom in an indecisive manner and he’s letting his outer eastern providences die in defense of his whole country, you can’t help but want them all to win. You even can’t help but rooting for him a little bit, as he realizes what he has done wrong and how he tries to fix it. Even though Joya d’Arena is in shambles and its poor and the people are starving and they can barely defend themselves, you want them to win because you want Elisa to win. And Elisa believes in the Joya d’Arena people. You are so excited to watch as she goes from a overweight, shy and unsure princess to a confident and capable ruler.

I don’t want to give away too much of this book, because there is so much to it that makes it an enjoyable book. Its fast paced enough to keep you wanting more and all the characters are believable. Elisa is one of the most believable female characters that I have ever read. Alejandro is a real character in that he represents the weakness of previous rulers, the reality that not all leaders are strong. I love Humberto and Cosme, Elisa’s captors who become her friends, because of their determination to succeed, to defend the place where they love and leave.

And the sequel is only that much better. This is a book that I definitely recommend. Five stars. A round of applause. Two thumbs up. Standing ovation. Rae Carson is a very talented and engaging writer and I can’t wait for more people to pick this book and enjoy it. I hope that this post encourages you all to pick up the book and that it encourages everyone to read the sequel, The Crown of Embers, which is even better than the first. I can’t wait til this fall with the last installment in the series comes out because its sure to be an instant hit, and even more enjoyable than the first two.