As some of you may know, back in May, I was diagnosed with Type 2 diabetes. I was at the hospital, dealing with a kidney stone, which is fairly common for me unfortunately, when one of the nurses that was taking care of me asked if I was diabetic. I told her, not that I was aware, and she told me I should see a doctor because my blood sugar was astronomically high. Not good. I got myself to the doctor and was promptly diagnosed. 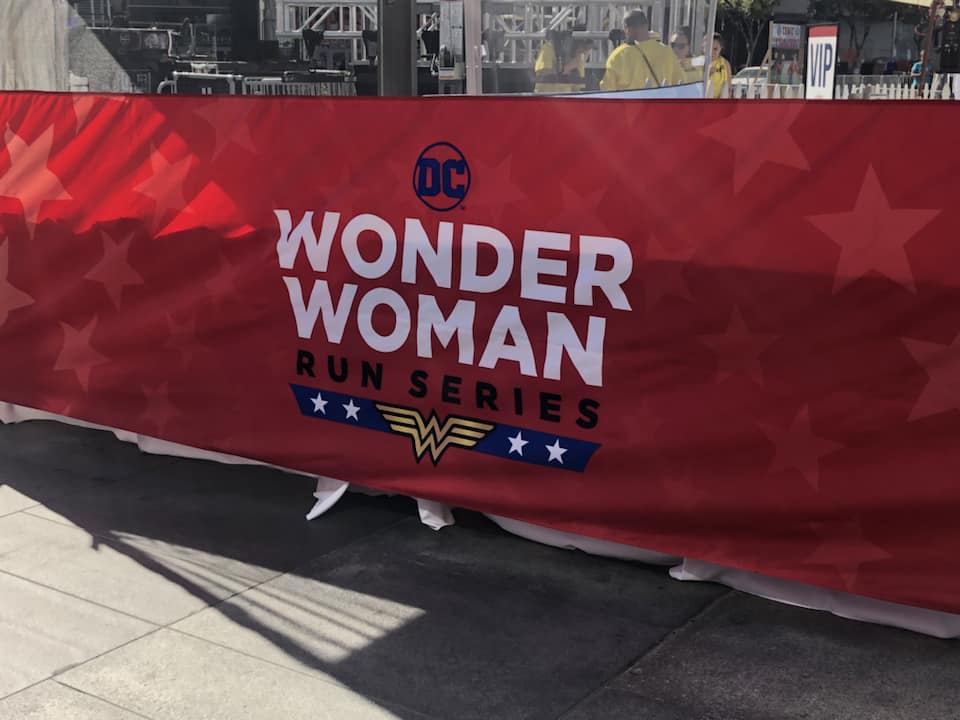 It was a complete wake up call. I had spent so many years of my life trying to be body positive and confident in my weight that I had neglected to actually take care of myself. I was eating horribly and I was overweight and I had deluded myself into thinking that was okay. Don’t get me wrong – I don’t think its an issue to be bigger. Not everyone is going to be skinny and that’s okay. But you can’t excuse your bad behavior and bad health on body positivity and that’s exactly what I had been doing. My diagnosis woke me up, got me eating healthier and working out – which is something I’ve never really done before. 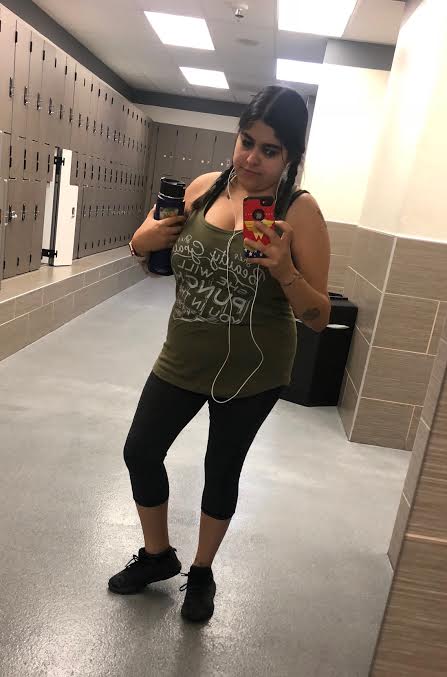 I’ve always wanted to run a 5K…but in that sort of way with, I’ve always wanted to visit foreign countries. It was possible, of course, but I never actually put in effort. I just always talked about it but never did anything about it. With me working out the way I have, it felt more real. And then I found something that made this longtime goal become something that I was actually going to do. Because I discovered that DC was doing a series of Wonder Woman 5K/10K races in California and one of them was in Los Angeles.

So I signed up.

I’ve spent the past five months since I signed up at the beginning of June training for this race. My goal, since the beginning, was just to finish it. To some people, 3.1 miles is not a lot. To someone like me who has avoided being athletic at every turn (because lack of balance, lacking of any athleticism, etc), it is a hard thing to do. I just wanted to finish.

As time passed though, I really began to enjoy running. What I do is barely considered a run – its more of a plod – but I still like it! It tires me out and sometimes I’m like, WHY, but it keeps my head clear, and it helps on those days when my emotions are just out of control. I started to think…wow could I actually run the whole thing? 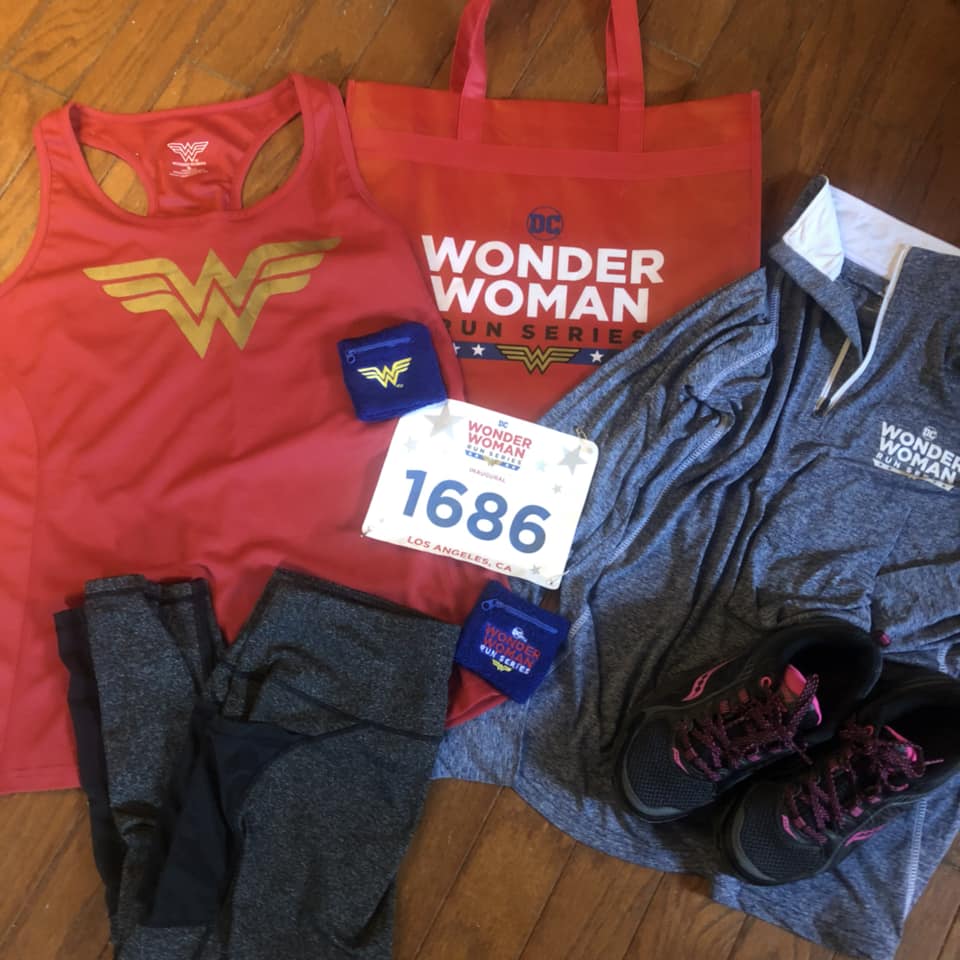 I’ve been SO insanely  nervous for this race, especially the day before and the day of. The day before, we went down to LA Live, where the race was going to be held, to pick up my race packet. It was an expensive race – at least compared to what my brother said he normally paid for races – but I’m really glad I chose Wonder Woman because she’s my favorite and so motivating and inspiring. Anyway, my race packet came with my bib and chip, wonder woman sweatbands for my wrists, a Wonder Woman running tank top and the medal. I spent some time in their merch tent and ended up getting both a light pullover and a tank top because honestly, the merch was so reasonably priced considering it was licensed merch. 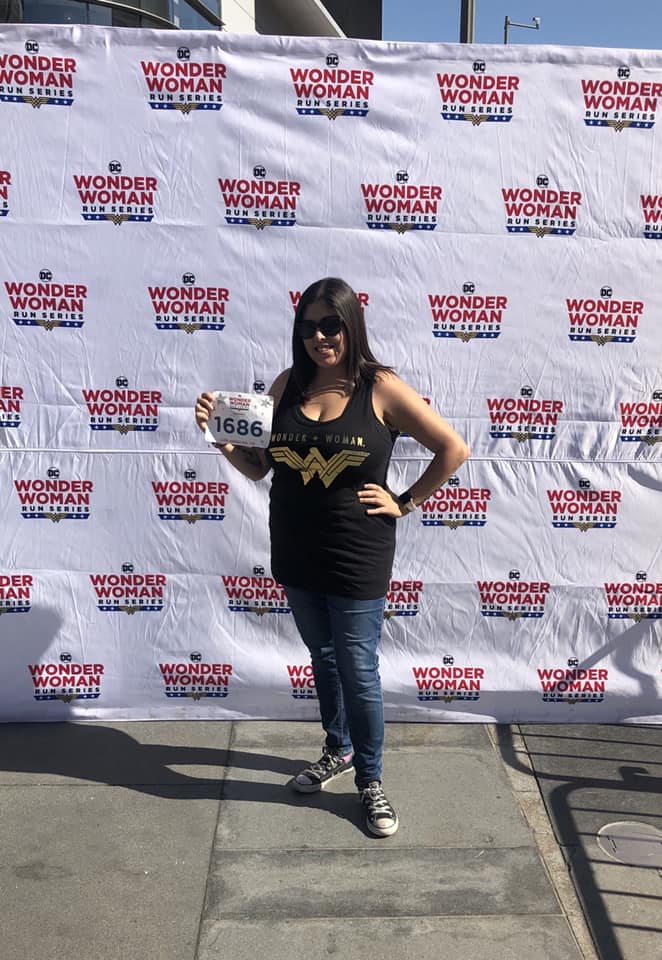 I really liked that it was a whole thing beforehand. I like that there was a ton of merch and that they had all kinds of photo booths and fun stuff. It made me have fun and enjoy all the Wonder Woman stuff and it took my mind off the impending race ahead of me. I really liked how interactive it all was, especially since I’m such a huge Wonder Woman fan. 12ish muffin and spent the entire drive in silence. I was a little less nervous once we got there since there was SO much going and it was cool to see all the people – mostly women – so excited for the race. We ran into some of my boyfriend’s friends who were also running the race and they were so nice and encouraging and it made me feel better. 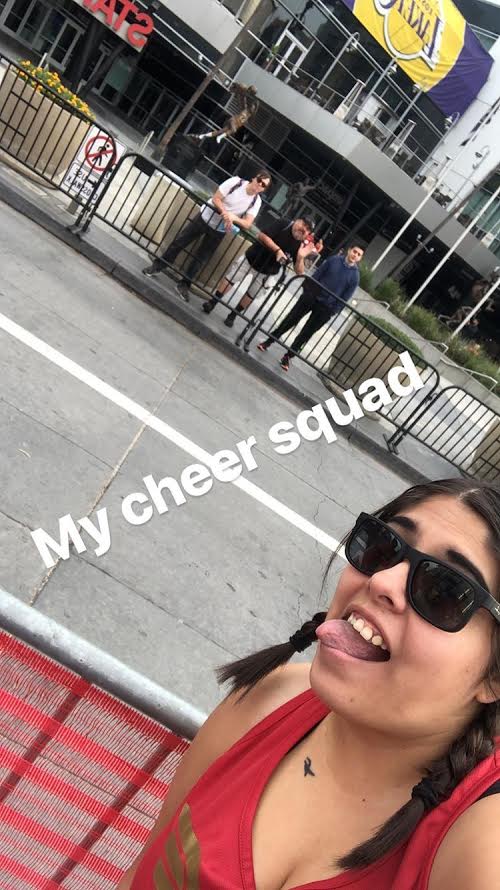 Besides my boyfriend, my dad and my brother, Robby, came to my race as well! It really meant a lot. I know that sports have always been important to my dad and I’ve always been a big sports fan but I haven’t really participated since I was a little kid and figured out that sports weren’t for me. He’s always been so supportive but I think it really meant a lot to him to see me run and it meant a LOT to me as well. My brother Robby has been a competitive runner for as long as I can remember, since he was about 12ish and I was about 14. He’s a long distance runner and I’ve gone to many cross country meets, track meets and various 5K/10K/half marathon races for him. To have him there cheering me on and believing I could do it, even though it was NO where near the competitive times he is used to, meant seriously so much to me. 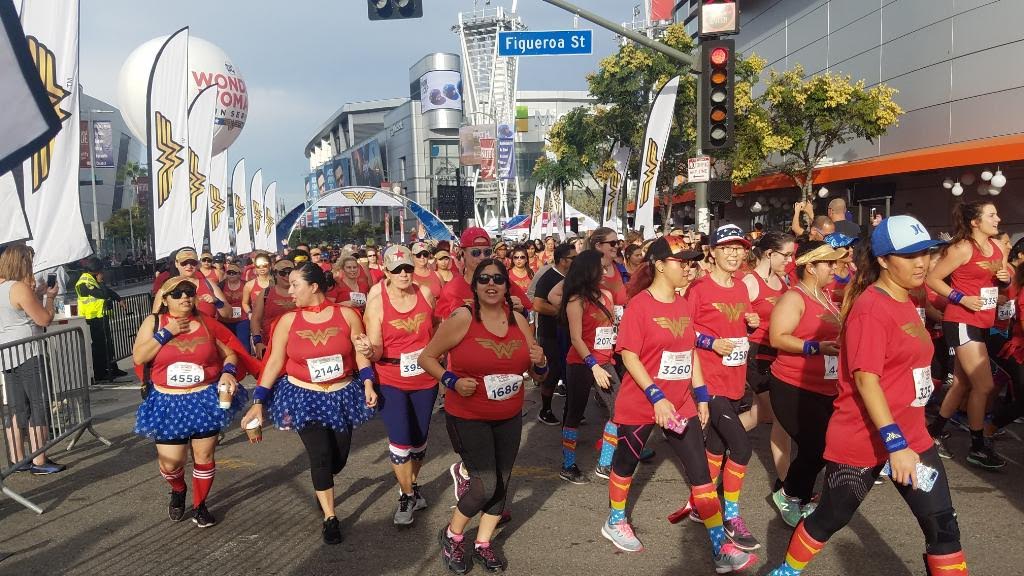 Right as I first started the race!

Once the actual race started – it was like my nerves completely disappeared. I honestly forgot that I was nervous in the first place. People kept telling me about adrenaline and I really didn’t understand until I started going – I ran that first mile so fast that I had to remind myself to slow down a bit because I still had 2.1 to go! It was just so fun. 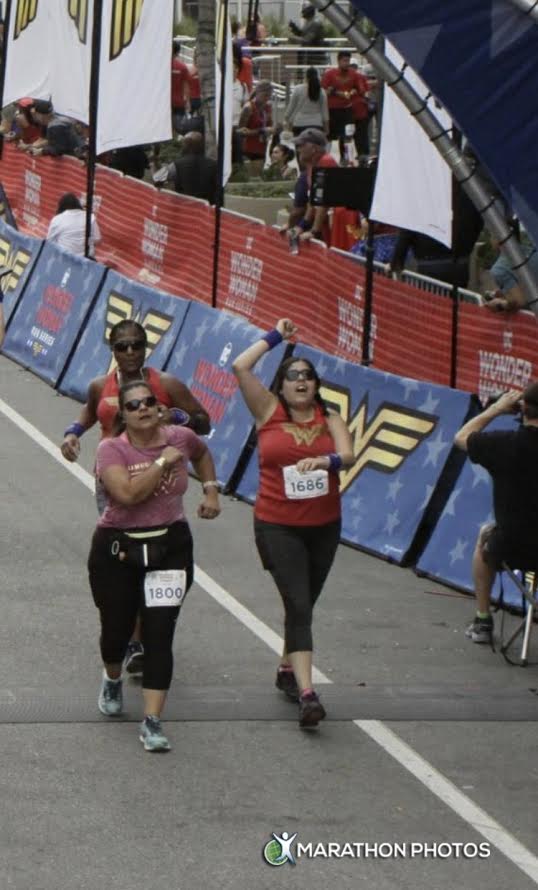 As I crossed the finish line!

Don’t get me wrong, it was HARD. There was particularly long stretch of the race that just felt so long and I kept wanting to stop running, but I was determined to run the whole thing. They had DJs and cheer squads and dance crews along the course, cheering people on and pumping people up, and it helped so much. Everyone was so encouraging – all the runners and walkers – I almost wanted to cry because it was just so positive. I am pretty sure I had a smile on my face the entire time.

I am seriously so happy and tired in this picture. You can’t tell but I’m also totally crying.

Toward the end of the race, right before the turn to the finish, my dad, Robby and Daniel were all cheering for me, loudly, like they do, and some older ladies in front of me started cheering for me as well, telling me they were proud of me…it was just so beautiful. I’m literally tearing up as I write this because it was just so perfect. I sped up for the last bit of the race and crossed the finish, just totally wiped out and exhausted. I remember thinking, oh god, I can’t move and then I saw the volunteers handing out the medals and immediately thought, oh yeah, I can move! 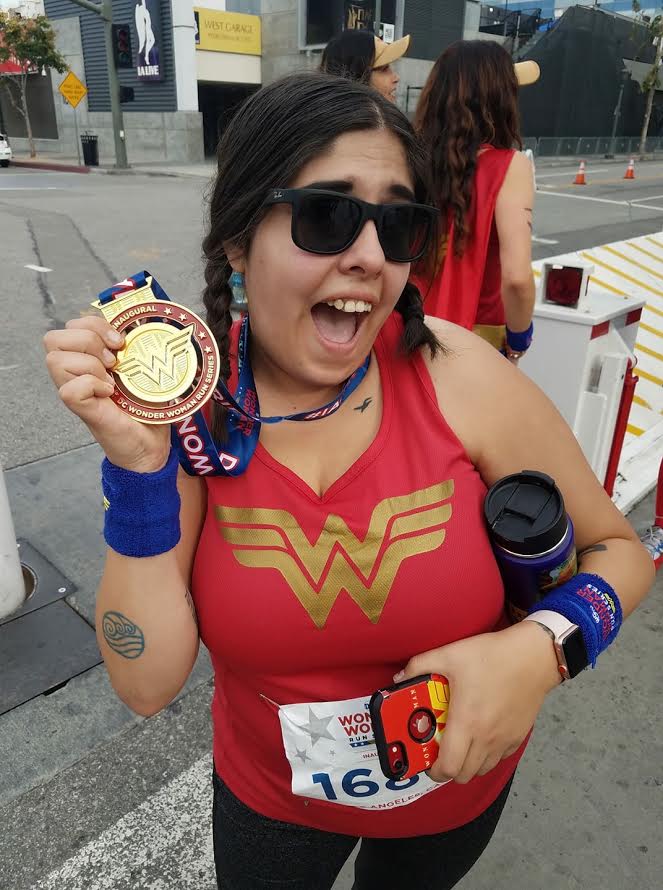 My very first medal! Its so beautiful and heavy!

I am so proud of the medal that I earned. I ran my fastest long distance mile (I run faster when I do a single mile, but during training, my mile times get slower because I’m trying to pace out my energy) at 13:30 and I ran my fastest 5K at 46:25. And I’m proud to say that I ran the entire thing. I was so tired but so happy and proud of myself. I hugged my three cheerleaders and I just literally have had a smile on my face about that day all week. I never really understood runner’s high until that race. I am so happy. I’m so proud. I’m so glad that it was the Wonder Woman 5K that was my first one. The medal is gorgeous, I love love love the character and I love that it was mostly woman –  partly because it was less intimidating and partly because it just made me feel empowered around all this badass women. 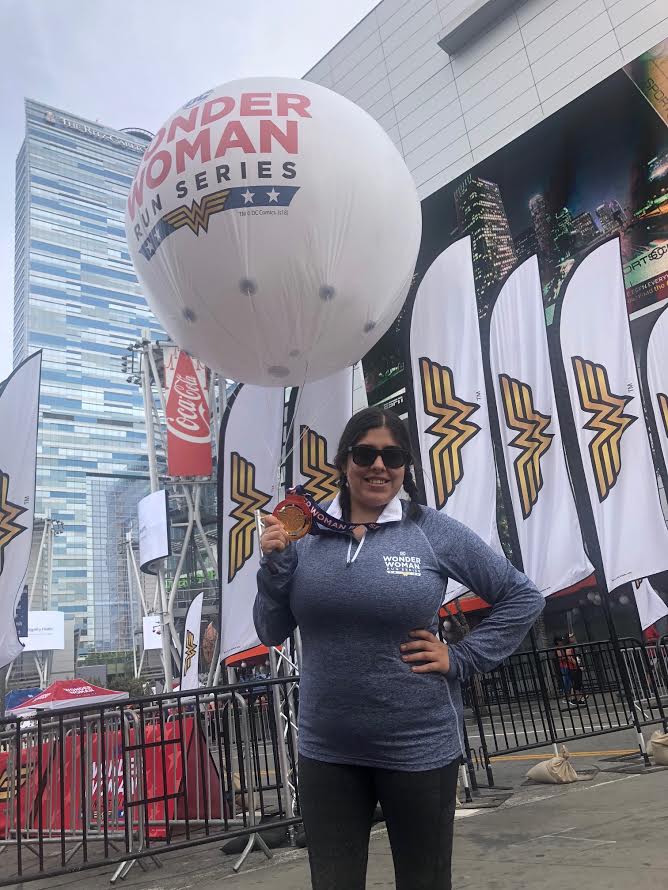 It wasn’t even a week ago but I’m already planning my next one. I’m hooked. I want to try to do some more nerdy themed ones so I can justify bragging about them here on the blog LOL but I’m definitely excited to do more in the future! This was the inaugural year for the series but I think it had a lot of success and I wouldn’t be surprised if they did it again next year – which I have the insane goal to do the 10K instead, agh! – and I wouldn’t be surprised if they extended it to other cities. It was such a blast and I highly highly recommend it! I honestly wish I could do the San Diego one, but funds are low, but I definitely want to do it again! 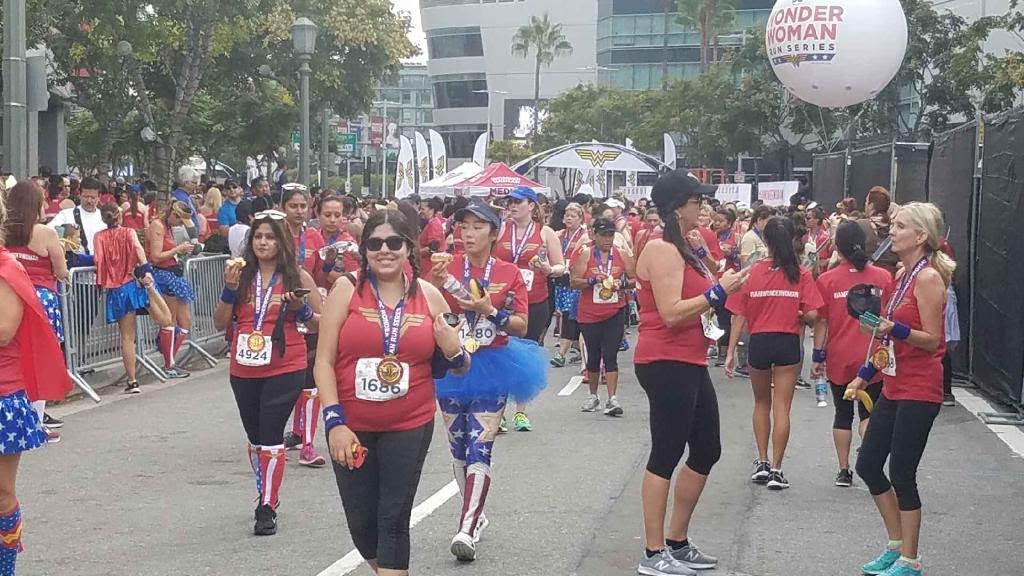 Look at that face! I just ran 3.1 miles without stopping – I’m literally walking away from the finish line, right after getting my medal, and I am all smiles. That was such a euphoric feeling and I definitely want to feel it again!

3 thoughts on “Event Recap: I Ran My First 5K and It Was Wonder Woman Themed!”