Recently I started playing a space edition of Dungeons and Dragons with my boyfriend, who in turn, asked me if I had any good recommendations for some science fiction that takes place in space. The first thing that came to mind was this series and after he started listening to the audiobook of the first book, I, of course, started my reread and this is what is prompting this week’s Flashback Friday!

Please keep in mind that Throback Thursday reviews are based on reread books. They most likely will contain spoilers as the books have already been released for some time. This is your only warning if you want to avoid spoilers for these books. 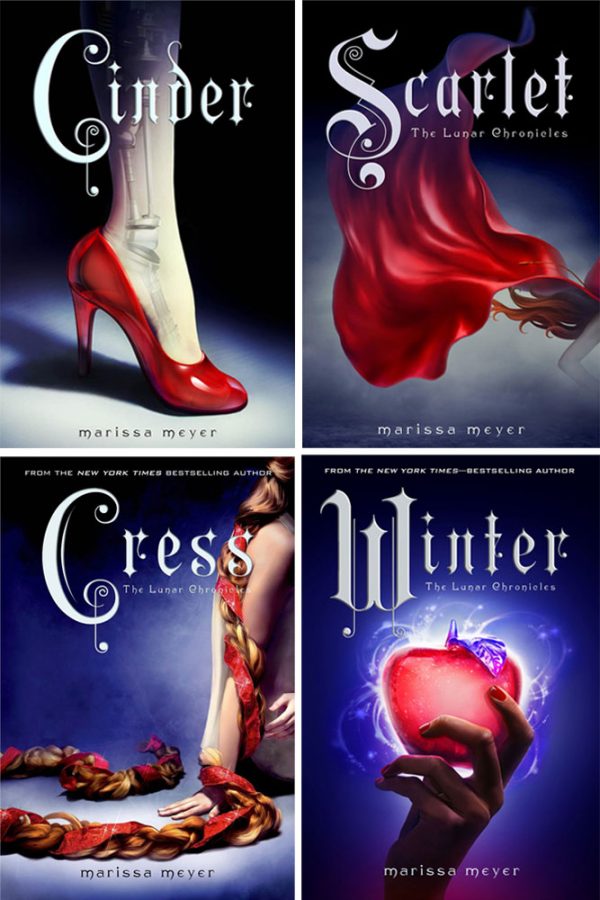 Novellas – Fairest and Stars Above were not read in my reread

Cinder, a gifted mechanic, is a cyborg. She’s a second-class citizen with a mysterious past, reviled by her stepmother and blamed for her stepsister’s illness. But when her life becomes intertwined with the handsome Prince Kai’s, she suddenly finds herself at the center of an intergalactic struggle, and a forbidden attraction. Caught between duty and freedom, loyalty and betrayal, she must uncover secrets about her past in order to protect her world’s future.

Cinder returns in the second thrilling installment of the New York Times-bestselling Lunar Chronicles. She’s trying to break out of prison—even though if she succeeds, she’ll be the Commonwealth’s most wanted fugitive.

Halfway around the world, Scarlet Benoit’s grandmother is missing. It turns out there are many things Scarlet doesn’t know about her grandmother and the grave danger she has lived in her whole life.

In this third book in the bestselling Lunar Chronicles series, Cinder and Captain Thorne are fugitives on the run, with Scarlet and Wolf in tow. Together, they’re plotting to overthrow Queen Levana and prevent her army from invading Earth.

Their best hope lies with Cress, who has been trapped on a satellite since childhood with only her netscreens as company. All that screen time has made Cress an excellent hacker – unfortunately, she’s being forced to work for Queen Levana, and she’s just received orders to track down Cinder and her handsome accomplice.

Together with the cyborg mechanic, Cinder, and her allies, Winter might even have the power to launch a revolution and win a war that’s been raging for far too long. Can Cinder, Scarlet, Cress, and Winter defeat Levana and find their happily ever afters?

I always knew that I loved this series but it had been some time since I read them, Winter being the last one I read when it came out in 2015, nearly three years ago. Rereading them in the past few weeks or so reminded me how much I really do love it and its really cemented the series as one of my favorites of all times.

Her world building skills are out of this world (eh? eh? Okay I’ll stop…) I tend to love fantasy more than I like science fiction but science fiction is a close second and I think there’s something about the Lunar Chronicles that mixes science fiction and fantasy and sort of dystopia/utopia and classic fairy tale and it comes together to make such a fantastic series.
Rereading the books made me remember how much I liked Cinder. Cinder is very much a reluctant hero, and sometimes I think her desire to be the hero, her desire to take her place as Selene and overthrow Levana and become queen came more out of survival, her own and those important to her, and less about a personal need to and I kind of liked that. She stumbles along through it and even when she’s handed her title, she still doesn’t really want it. She’s glad she did it but she’s not taking to her role as queen with a lot of enthusiasm. Which is really interesting considering that if she continues in her feelings and relationship with Kai, she’ll still be a leader, she’ll be an empress so its just an interesting piece about her character, both herself as Cinder and herself as Selene.
I hadn’t realized how much I loved Scarlet and Winter until my reread. I knew I liked them but after rereading, I realized I liked them so much more and their counterparts, Wolf and Jacen. They all have such strengths and flaws that really lend to the story and its really when Scarlet and Wolf join the scene that the story seems to take off. Their backstories and their stakes in what is going on just opens up the story so much more from the first book and I think Scarlet (the book, not the character) is where I truly fell in love with the series. We see more of the world, we see more of what Levana is capable of, we meet Cress and Thorne and we finally get to space. I love Scarlet’s attitude, her tenacity, her ability to just keep going even though she is put into situations where no one would judge if she completely fell apart. And I’d forgotten how seriously weird Winter is but how genuine she is, how kind she is and how hard she works to get through each day and even though her struggles comes from not using her powers, it alludes to mental illness and its nice to read the situations that happens with her and how Jacen gets her through them.
Mostly I remembered how much I truly freaking adore both Cress and Thorne as characters. I already knew I loved them but I hadn’t reread Cress or Winter since their releases so it felt good to go back and just remember how much I love them as individual characters and how much I love them as a couple. I love how freaking smart Cress is and I love her learning to be confident and sure outside of the comfort zone of her satellite.  I love that Thorne embodies Flynn Rider so much and he’s charming and adventurous and a total thief and finds the humor in the darkest times but he’s also real and has emotions and uses a lot of his charm to cover his emotions. Plus that scene where Thorne lifts Cress up onto a desk and just totally ravishes her with kisses still makes me blush so much. Sigh.
I’m super glad I reread these books. It made me remember how much  I truly enjoy the series and I feel like I can say with confidence that it was one of my favorite series ever. Its just so good, the characters are phenomenal, the world building is great and the mix of fantasy, science fiction and fairy tale are blended so perfectly. I have continued to love Marissa’s books and can’t wait to read more from her.