This weekend, at the Los Angeles Central Branch Library, teen librarian and soon to be published author, Mary McCoy is hosting a ton of fantastic YA authors for the Los Angeles Teen Book Fest, which I wrote about a few days ago. You can find out more information about the event here. 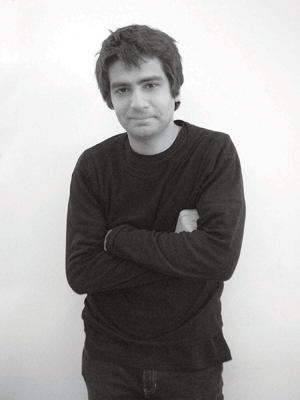 One of the amazing authors that will be at this fest is Ned Vizzini. Ned is mostly known for his novel, Its Kind of a Funny Story, the story of a New York teen, Craig, who battles with depression. He’s also written the novels, Be More Chill and The Other Normals, both YA books. With Chris Columbus, he co-authors a children’s book series called The House of Secrets, the second of which will release in March.

Currently, Ned Vizzini is working on The House of Secrets, and as a TV writer, for a television show called, Believe, from JJ Abrams and Alfonso Cuaron, which will be premiering on TV in March.

Being able to interview Ned before meeting him on Saturday was a blast. It was my first over-the-phone interview, so I was a bit nervous but I think I did an exceptional job, and he was easy to talk to, and had great answers for my questions. Check it out.

Sara: Which book is harder to write: the first book, or the second?

Ned: The second book was harder to write, although for me, the second book had a normal writing time. It usually takes me between one to two months to write a  book. I worked on one book for 22 months. It wasn’t good.

Sara: Does that go with the kind of writing advice you give to aspiring writers, then?

Sara: Where do you get your inspiration from?

Ned: From being observant. If I observe something, fifty thousand other people have observed it too.

Sara: I’m about halfway through Its Kind of a Funny Story, I haven’t finished it yet, but I know that it focuses on Craig and his depression. Why did you choose to focus on that?

Ned: I went through a difficult time in my life, in my early twenties, and I found myself dealing with issues of life and death. This really spoke to me, and I chose to write about those issues.

Sara: What is the best part about being an author?

Ned: You get to make your own schedule. Its also very rewarding to get emails from people, who say they didn’t like reading, but read your book and like to read it. Its a high reward in young adult and children’s books. Adults books can do the same, but I remember the books that me want to read when I was a child.

Sara: What are some things you enjoy doing besides reading?

Ned: Going to the post office (Why?) Because I have to send books out to people, and its peaceful, and you pay for it, and things go out all over the world, and its exciting.

Sara: What are some of your favorite authors to read?

Ned: Well, right now, I’m reading The Confessions of Max Tivoli by Andrew Sean Greer. I don’t like giving out lists, because its always changing, so I always tell people what I’m reading now, so they know that I am reading.

Sara: What are you working on now and what can we expect from you in the future?

Ned: Right now, writing for a television show with JJ Abrams and Alfonso Cuaron, for NBC which will be premiering in March. I’m also working on a fantasy series for kids, House of Secrets, with Chris Columbus. The second book, The Battle of the Beasts, also comes out in March of next year. The Other Normals comes out in paperback. I’m having a lot happen in March.

Sara: Well, my last question is kind of silly but I ask everyone that I interview: who is your fictional crush?

Ned: Is it okay if she appears in my own books?

Sara: Yeah, of course. I think we tend to write our own crushes.

Ned: Ada Ember from The Other Normals. She has blue hair and her fingernails sparkle naturally because she is a fantasy character. She is also a safe crush to have, as my wife would rather me have a fantasy crush (laughs),.

Thank you SO much Ned for taking the time out of your VERY busy schedule to share a little insight on your writing, and your life, with What A Nerd Girl Says. It is ALWAYS so much appreciated. I can’t wait to finish It’s Kind of a Funny Story, and to jump into other novels.

Don’t forget that the second book in the House of Secrets series, The Battle of the Beasts, will be hitting bookstores on March 25, 2014!

I’ll be meeting Ned, and other authors, like Tuesday’s featured author, Francesca Lia Block, on Saturday at the Los Angeles Teen Book Fest. I hope to see some of you there!

All photos are courtesy of Ned Vizzini and are directly taken from his website.