Now, my most recent obsession has been Doctor Who. People have been telling me to watch this show for YEARS and I’ve just never done it. Finally one day, I was bored, the entire series is on Netflix and I decided to watch it.

I powered through the entire six seasons in about a month, maybe less. I watched it for hours before I forced myself to go to bed and as soon as I woke up in the morning. I became obsessed.

This is a fantastic show. It has everything a nerd could want: fantasy and sci-fi, but with humor and charm. Christopher Eggleston, David Tennant and Matt Smith all do wonderful at playing The Doctor, a 900-year-old time-traveling, regenerating alien, who literally can’t go anywhere without the end of the universe being at stake.

So I decided to compile a little list of my absolute favorite Doctor Who moments. I do warn you; there are major spoilers (BEEP BEEP SPOILER ALERT!) ahead. If you have never watched Doctor Who, or just don’t care to (though you’re crazy! Why on earth would you not want to watch this show!), I would tread carefully. I don’t want to ruin some of the best things about this fantastic show.

Donna Noble, the Tenth Doctor’s third companion, is one of my favorites. She’s brash and humorous and sometimes doesn’t always quite believe in herself to be as amazing as she is. She is a fantastic character and Catherine Tate does a great job playing her. When she first appears, randomly, in the Tardis, its hilarious. The Doctor has just said an extremely emotional good-bye to Rose Tyler (see later…) and is quietly contemplating when Donna suddenly appears and demands to know how the hell she got into the Tardis. Of course, the Doctor is completely confused and then its the end of the episode. This is such an insanely hilarious moment which brings you back from your tears (don’t lie, you cried) and reminds you that next season is going to be so much fun.

This episode made me extremely nervous. It’s the first episode with Matt Smith as the Doctor and I adored David Tennant. I was extremely sad to see David Tennant leave. So I went into this episode with a little bit of trepidation. Boy, was I just being paranoid? Matt Smith is a GREAT Doctor and brings his own bit of humor and charm to the role. The first scene between him and Amy Pond, as he tries to figure out what he wants to eat is hilarious. He wants apples, he hates apples, he wants yogurt, he hates yogurt, and bacon and beans and on and on. And it’s not until he grabs a box of fish fingers and a tub of custard, that is he finally satisfied. And this moment is so pivotal in the friendship between the Doctor and Amy Pond, it is such an important moment to them.

Christopher Eggleston, a.k.a. the 9th Doctor, only had one season to himself and I feel is sometimes overlooked. I adored him. Season one is the first season I watched and his character, his humor and his charm is what brought me on board to watch the show. He can be silly and make jokes about the most random things but he can be so serious and worldly and wise at the same time. Every single time he said his key phrase “Fantastic!” I couldn’t help but have the biggest smile in the world.

Now this little reveal at the end of Season 3, has always been speculation, never actual confirmation. The Face of Boe had been a recurring character in Doctor Who and so had Captain Jack. We learn that Jack cannot die and it has been speculated that the Face of Boe dies at a very very old age. When Captain Jack says in the third season finale that they called him the Face of Boe…I admit it, my mouth dropped open. It made perfect sense to me and whether or not its actually true…well it still was an awesome moment that got every Whovian thinking.

This is one of my favorite scenes with Matt Smith. You’re feeling kind of apprehensive of him, he is a new Doctor and we’re not quite behind him yet. But this moment makes me on board in an instant. He saves the entire world in 20 minutes from the Atraxi and then CALLS THEM BACK to threaten them to never come back to Earth ever. They show a nice little montage of all the Doctors previous and then says “Hi, I’m the Doctor. Basically…run.” If you didn’t cheer along with this, you have no emotions.

I think most people would agree that this is one of the creepiest episodes in the Doctor Who history. I’m not the biggest fan of creepy kids in movies; that’s one of the only thing that scares the living daylights out of me in movies. So this little kid, wearing a gas mask, walking around asking for his mummy, is straight up freaky. And then all the people in the hospital start growing gas masks out of their face. The best part of the episode is when Nancy accepts this little boy as her son, causing even the hardest heart to say “Aw.”

This is the most emotional moment in the Doctor Who series, besides my number one pick. The Doctor has gotten rid of the Master, and sacrificed himself for Donna’s grandfather, Wilfred. It’s time for him to die, time for him to regenerate. He goes to each of his companions, tells them goodbye and helps them. He comes back to the Tardis and now, its really time for goodbye. David Tennant’s performance is phenomenal, and you can’t help but feel your heart wrench when he says “I don’t want to go”.  For a David Tennant fan, this is a sad moment and a goodbye moment and its beautifully done.

3. Jumping Out of a Mirror-Season 2, Episode 4: The Girl in the Fireplace

This is one of my favorite episodes. I love the episodes where the Doctor goes back in time and meets famous historical figures like Shakespeare, Charles Dickens, the queens, and Vincent Van Gogh. I think this is just a fun episode, the aliens are interesting looking and the story between Madame de Pompadour and the Doctor is so genuine and believable. I almost felt bad that there couldn’t have been anything between them. (I’m a huge Rose-The Doctor shipper). But the best moment of the episode is when the Doctor mounts the horse and goes crashing through the mirror that represents the time dimension and goes to rescue Madame de Pompadour from getting her brain ripped from her body. Epic. Moment.

The Big Bang is one of my favorite episodes because it has so many awesome moments; The Doctor jumping back and forth in time, the infamous fez, Rory waiting and protecting Amy Pond for 2000 years, etc. But my favorite moment is when Amy remembers the Doctor, after he has basically never existed, at her wedding and knows, without a doubt, that the Doctor is coming because he will always come. She says the famous wedding words “Something old, something new, something borrowed and something blue”, which I thought was a fantastic way to describe the Tardis. To me, it shows a really turning point for Amy. She lost faith in people as a child when the mysterious Raggedy Doctor says he’ll be back in five minutes and doesn’t return for 12 years and now regains that trust and faith. Plus Rory saying “How could we forget the Doctor…I was plastic!” is just a fantastic Rory moment. 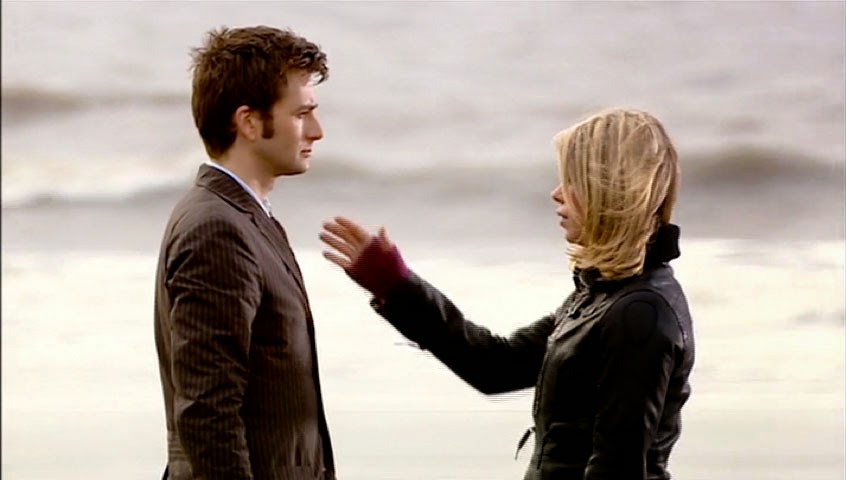 I love Rose Tyler. She is by far my favorite companion. And I loved her relationship with the Doctor. She is the only companion that I wanted with the Doctor. My least favorite companion was Martha because she fell in love with the Doctor. I was like, uh, no, he loves Rose! Anyway, the scene where you realize that Rose is in a parallel world and they are living away from each other…it sucks. It’s horrible. You can’t believe it and you’re hoping its not true. Then the scene where Rose comes to Norway and the Doctor comes to say his final goodbye…water works. Tears galore. You can feel Rose’s pain as she realizes that she will never see him again (as far as we know) and when she finally says her feelings out loud. The scene is so raw and real and makes me cry. Every. Single. Time.

Now, if you’ve never watched Doctor Who and you’ve read that entire thing, I’m sorry for ruining it for you. I did warn you above. Sorry I’m not that sorry. But you should definitely check out the show. Its definitely my favorite show now and my new nerd obsession.

And for those of you who have watched Doctor Who and love it, do you agree? What would be some of your favorite moments?

P.S. Do I say the word “fantastic” a lot? I think that I do. Well its an awesome word!

8 thoughts on “No One Forgets Their First Doctor – My Top Ten Favorite Doctor Who Moments!”