Five years ago, Wren Connolly was shot three times in the chest. After 178 minutes she came back as a Reboot: stronger, faster, able to heal, and less emotional. The longer Reboots are dead, the less human they are when they return. Wren 178 is the deadliest Reboot in the Republic of Texas. Now seventeen years old, she serves as a soldier for HARC (Human Advancement and Repopulation Corporation). 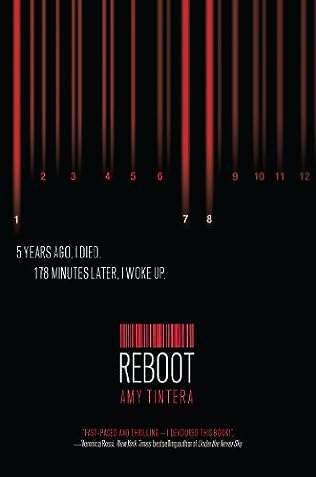 Five years ago, Wren Connolly was shot three times in the chest. After 178 minutes she came back as a Reboot: stronger, faster, able to heal, and less emotional. The longer Reboots are dead, the less human they are when they return. Wren 178 is the deadliest Reboot in the Republic of Texas. Now seventeen years old, she serves as a soldier for HARC (Human Advancement and Repopulation Corporation).

Wren’s favorite part of the job is training new Reboots, but her latest newbie is the worst she’s ever seen. As a 22, Callum Reyes is practically human. His reflexes are too slow, he’s always asking questions, and his ever-present smile is freaking her out. Yet there’s something about him she can’t ignore. When Callum refuses to follow an order, Wren is given one last chance to get him in line—or she’ll have to eliminate him. Wren has never disobeyed before and knows if she does, she’ll be eliminated, too. But she has also never felt as alive as she does around Callum.

I had seen this book around for ages it seems like, sitting on book shelves, or on people’s TBR lists on GoodReads, but I didn’t go forward and do anything about it until my friend, Erin, from That One Geek Girl, read it and loved it, and she’s going to be at the Pasadena Teen Book Fest. Which is awesome. When I was shopping for books on my birthday, I was glad to find a copy and immediately bought it.

And I’m so so so glad that I did. I’m so glad. I would have read this book in a few hours, but life got in the way in the process, but I finished it quickly. I actually just discovered that the sequel, Rebel, is an e-ARC on Edelweiss and I just downloaded it and I had to force myself to log on to write the review of Reboot before I immediately sat down on my Nook and started reading.

I am so highly impressed with Amy Tintera’s book and I’m so glad that I read it. The concept was new, refreshing and something that I immediately felt connected to. You’re in the head of the main character, Wren, who has lost much her humanity in the 178 minutes that she was dead before she rebooted. You would think that would make her a hard character to understand, or to become familiar with but it was so easy to become attached to her. She’s doing her job, and she enjoys it. She enjoys being quick, strong and ruthless. She is more satisfied being a Reboot than she was as a human.

Then we enter Callum into the story. Callum is a recent Reboot, a 22, who still retains a lot of his humanity and immediately starts to drive Wren kind of crazy. Which, of course, made me love him right away. They are absolute polar opposites and I love that in a couple, especially when its usually the boy who is mysterious and hard and unemotional. I loved that Callum was fun, and always had a smile on his face, and was so determined to find Wren’s humanity.

The two of them together really brings a beautiful love story, and it happens in a such a slow-paced, perfect way that kept me turning the pages, desperate to find out what happened next. The subtlety of their relationship was exactly the way it should have been: not too obvious, not too quick, but creeping up on the both of them.

But it was more than the love story that kept me interested. It was the story of Texas and the reboots and the HARC and the world that now was. The virus, the serums they were injecting into the lower Reboots, the slums and the ricos. We’re told just enough that we feel comfortable but there’s enough kept from us, from Wren herself, that makes you want to keep reading. There’s something fishy going on in this society but what? What is going on? That’s what keeps you reading. The mystery of knowing only so much of what is actually going on is frustrating, but in a good way. It makes you want to read, it keeps you reading. So many books nowadays spoon feed you but not Reboot. Not Amy. She keeps you guessing and dodging and running right alongside the story and its awesome.

I also really love the action. Any time that I can read a book where a girl kicks ass, where anyone kicks ass, is something that is very enjoyable to me. There’s just something fun about a really good fight scene and there are some really GREAT ones in this book.

Now I think I’ve talked about this book enough, and my last word is going to be this: Read the book. Honestly. Its really fun, its action packed, and full of mystery and guessing. Its fast paced, and even a little frightening and heart wrenching at times. And the love story is simple, slow and beautiful. Now I have to finish this so I can go read Rebel now…