More Four! Fans of the Divergent series by #1 New York Times bestselling author Veronica Roth will be thrilled by “The Transfer, “the first of four new short stories told from Four’s perspective. Each brief story explores the world of the Divergent series through the eyes of the mysterious but charismatic Tobias Eaton, revealing previously unknown facets of his personality, and backstory, and relationships. 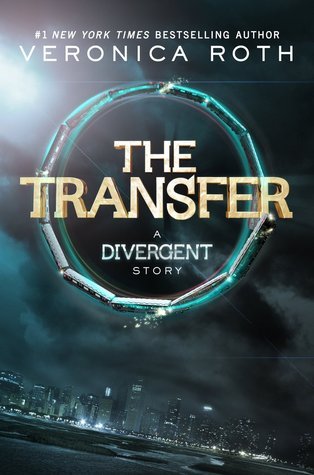 More Four! Fans of the Divergent series by #1 New York Times bestselling author Veronica Roth will be thrilled by “The Transfer, “the first of four new short stories told from Four’s perspective. Each brief story explores the world of the Divergent series through the eyes of the mysterious but charismatic Tobias Eaton, revealing previously unknown facets of his personality, and backstory, and relationships.

I don’t really like this description so I’ll basically say this:

This is the first story of the planned four stories (get it, four stories about Four!). This story is exactly how it sounds: it tells the story of Tobias as he goes through his aptitude test, and a peek into the relationship he has with his father, and his journey to make the decision of choosing Dauntless as his faction.

I was extremely wary when I found out about this, the way I was when Cassandra Clare announced her intention to write The Bane Chronicles. I didn’t really understand why they were stories that needed to be told. I’ve been back and forth with The Bane Chronicles. There have been some that I’ve enjoyed and there were some that I just didn’t enjoy in the slightest. So I think I was really wary of reading these stories about Four.

And so far, I have yet to be disappointed, and I think its a good start. It gives me a lot of optimism for the three that are coming after this.

Here’s the thing about this particular story: it doesn’t necessarily need to be told. We know most of this by reading Divergent. We know that Four is really Tobias Eaton, that he transferred from Abnegation to Dauntless, mostly to escape the wrath and abuse of his father, Marcus, that he has four fears and that is where he gets his name from, etc. There isn’t new information in this story at all, at least not to me. There’s a small part that is newer, which is kind of a hint to Four about what is happening in the future and probably what helps him handle the events of the end of Divergent and all of Insurgent easier than others.

But even though this story didn’t necessarily have to be told, I’m glad that it was. For one thing, it really helps me to feel better about the dual point of view that is coming in the last Divergent book, Allegiant. I found that I really liked getting into Four’s head (I can’t call him Tobias, I just can’t. It just reminds me of Tobias Funke from Arrested Development) and seeing the way he told a story, the way he observes a world. It really gives us an insight on what to expect in Allegiant. This story sort of parallels the beginning of Divergent, as Tris goes through her aptitude test, her choice into Dauntless and her journey to the Dauntless compound for the first time, and it shows how a similar situation can be so different, and how this can translate into their journey in Allegiant.

Plus, even though I already knew these stories from Divergent and Insurgent, it was beautiful to get into his head as these things were happening to him. Four is this impenetrable force, this wall of strength and we don’t often get to see his vulnerabilities. But in this story, you really see how incredibly scared he was; scared of his father, and his expectations and even though he wants to get away from his father, he’s also terrified of leaving, as well. He’s a very scared, vulnerable sixteen year old, and his journey to the Dauntless compound is so different.

Its also incredibly, incredibly heartbreaking to watch the relationship between Marcus and Four. We’ve heard about it, we’ve seen part of it in Four’s fear landscape and in the way he interacts with him in the second book but this is the first time that we really see it up close and it hurts. It hurts very badly. I think part of this comes from the fact that there are parent-child relationships like this, with the mental and physical abuse that goes on from Marcus. You see so clearly why Four was so desperate to get out of Abnegation and why he felt so betrayed by Tris working with Marcus in Insurgent. Marcus is a very sick person who hurt both Four and his mother, and its not something that Four gets over quickly.

Lastly, I liked that the story of the Four as he goes through the test, the choosing of a faction and the actual transfer to his chosen faction because, like I said above, it really parallels the beginning of Divergent and we really get to see how different Four is to Tris, and why Tris stands out to him. They come from the same faction; they’re the only two in the past couple years from Abnegation to switch to Dauntless so of course he is going to notice her, and I think that becomes even more clear through his story. His story is so different, so full of fear, as he makes this decision and lives through his life. I think that Dauntless changes Four and makes him brave and show courage, but I think that Tris comes in with those already, but is unaware of it. Its interesting to see this two characters that end up together have two different stories of the similar situations.

Bravo, Veronica Roth. I can’t wait to read the rest!