Today’s Waiting on Wednesday post is Rage, the highly anticipated sequel to Cora Carmack’s Roar, her young adult fantasy debut that came out all the way back in 2017 and I’ve been dying to get my hands on. I’ve been patiently waiting – the delay was absolutely for good reason – so I’m excited that we are only THREE weeks away from the release! 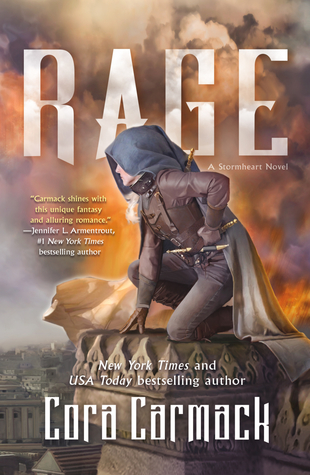 Her Kingdom or the Stormhunter she loves.

If Aurora knows anything, it’s that choices have consequences. To set things right, she joins a growing revolution on the streets of Pavan.

In disguise as the rebel Roar, she puts her knowledge of the palace to use to aid the rebellion. But the Rage season is at its peak and not a day passes without the skies raining down destruction. Yet these storms are different—they churn with darkness, and attack with a will that’s desperate and violent.

Roar was one of my favorite books that I read in 2017 and I was blown away by Cora’s fantasy skills. I know that originally she had wanted to write YA fantasy before getting published in new adult romance – which is what made me fall in loooove with her and her writing – so I was really excited when she was finally able to do that. Roar is fun and adventurous and it has its light moments and dark moments and a colorful cast of characters and plenty of that delicious Carmack romance trademark. I can’t wait to read Rage because it feels like its been SO long since I read Roar and I can’t wait to see what happens next. I can’t believe, after all this time, it is only 3 weeks away, which means its only 3 weeks away until I get this pretty book in my hands and only 3 weeks away from seeing my girl, Cora, again. SO excited!