Hello! Welcome to my special post during the blog tour to spread the love for Stephen Wallenfels’ new novel, Bad Call, where four teenagers get themselves into a lot of trouble while ill prepared for a poorly planned camping trip. I have a review to share and, even better, survival tips from the author himself. Check it out below! 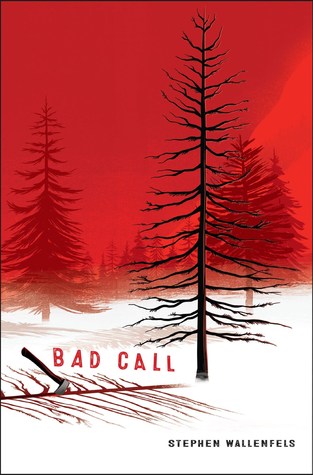 It was supposed to be epic.

During a late-night poker game, tennis teammates Colin, Ceo, Grahame, and Rhody make a pact to go on a camping trip in Yosemite National Park. And poker vows can’t be broken.

So the first sign that they should ditch the plan is when Rhody backs out. The next is when Ceo replaces him with Ellie, a girl Grahame and Colin have never even heard of. And then there’s the forest fire at their intended campsite. But instead of bailing, they decide to take the treacherous Snow Creek Falls Trail to the top of Yosemite Valley. From there, the bad decisions really pile up.

A freak storm is threatening snow, their Craigslist tent is a piece of junk, and Grahame is pretty sure there’s a bear on the prowl. On top of that, the guys have some serious baggage (and that’s not including the ridiculously heavy ax that Grahame insisted on packing) and Ellie can’t figure out what their deal is.

And then one of them doesn’t make it back to the tent.
Desperate to survive while piecing together what happened, the remaining hikers must decide who to trust in this riveting, witty, and truly unforgettable psychological thriller that reveals how one small mistake can have chilling consequences.

And (one of) my favorite survival movies: The Edge with Anthony Hopkins and Alec Baldwin. I actually reference this movie in BAD CALL.

The first time this novel was pitched to me to read and review, I knew I had to read it. One, it just sounded awesome and two, I knew that there was some serious sh*t that was going to go down and that definitely happened. Not only do Colin, Ceo, Grahame and Ellie get themselves into serious survival mode but they also have so many volatile emotions going on at the same time and it leads to one crazy story.

I’m not an outdoorsy person. Camping for me was a campground at the beach or campgrounds with Girl Scouts. We learned basics, that’s for sure, but I don’t know what I would do if I was actually trying to survive. My boyfriend is a big hiker and so I’ve started to do that…and reading this book, I knew enough to want to scream, WHAT ARE YOU DOING?

Colin leaving the hoodie behind, wearing god awful shoes, the terrible tents they use, the lack of food, the insane lack of water…I could go on and on and I felt like, even with the terrible conditions they find themselves in, they were headed into trouble. This is a huge reason why I busted through this book in a matter of hours, because I knew, I just knew, that these kids were about to get themselves into some serious trouble. I had to watch it happen. I even told my boyfriend, “they’re going to die. someone is totally going to die!” When I finished the book, his first question was, “So how many died?”

But I also liked that there were so many emotions going on while this was happening. There was a lot of anger, resentment, confusion, sexual tension (I mean, they are teenagers…) before they even got to Yosemite and the conditions they were forced into only made those emotions boil to the surface and burst. It made everything that much tense and exciting. Yes, it was snowing and it was freezing and there was no water and there’s a bear and the tents are useless but Grahame is pissed at everyone and Colin is watching the tension between Grahame and Ceo, and Ellie is watching all of it, with no idea what’s going on and its so exciting, from beginning to end.

This book reads like a news headline, that moment when you pick up the paper and you see that story about the hikers that got lost but it gives it a story, it gives it meaning, it gives it life. The emotions and tensions between the characters are so real and it bleeds into the thrill of survival in these extreme conditions. It was nice to take a break from what I usually read in YA and I thoroughly enjoyed it.