So I apologize for the fact that this is a day late. This week, I started school, went to TWO different book signings, worked and got a new tattoo. This is apparently just too much for me to handle and so I got a little behind in the blogging. However, I finished Sarah J. Maa’s new book, the second of the Throne of Glass series, last night and I can’t wait to share my review with you! 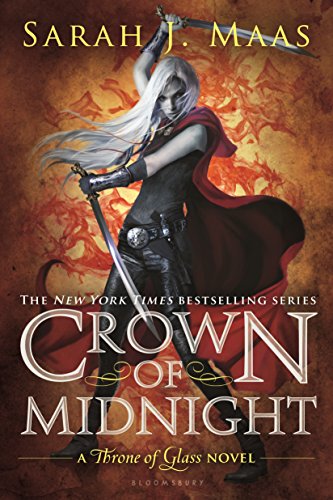 Part of a Series?

Yes. This is the second novel of the Throne of Glass series

Warning: This post will NOT contain spoilers for this particular novel. However, there very well could be spoilers for any previous novels. Please check out my review of Throne of Glass here.

The Tortall books by Tamora Pierce, Graceling by Kristin Cashore, The Girl of Fire and Thorns by Rae Carson

The thing about Throne of Glass is that Celaena is determined to become King’s Champion in order to guarantee her freedom, away from the mines, and away from the cruel and powerful king. When she accomplishes this, she merely has to serve the King for two years and she’ll be free. But there is way more going on than she realizes. She’s given the tasks to find and kill people who the king claims as traitors and rebels to the crown, until he gives her the name of someone she knew long ago. Her friend, the princess Nehemia, is determined to make more of Celaena’s power than she’s been using it for. Chaol and Calaena’s friendship has the possibility of being more, while Dorian watches on the sidelines and tries to forget about her. Celaena has to spend her time deciding who is right and who is wrong, who to trust and who is lying to her, all while trying to preserve her own life under the rule of this powerful and cruel king. Then a tragedy occurs, and everything that Celaena had known or guessed is now in question and she’s on a mission, a mission to make things right, for revenge, for justice.

Uh, that it ended? Seriously. I think the worst part of the book is the fact that it ended and who knows when the third book will come out. Without ruining anything for those of you who have not yet had the chance to read it, or can’t read it because it hasn’t released in your country, I will say this: this book breaks your heart in several different ways. And it leaves you absolutely begging for more. I stared at the last page for a long while, wondering if that was really the end or if there was going to be a little note “just kidding, keep reading”. Of course, there wasn’t, but I wish there was and I wish that I could read what happens next!

Sarah’s ability to tell a story is absolutely fantastic. Just when you think that you have figured out what is going on, you’re thrown completely for a loop and you’re sent spiraling into a completely different direction. That is great storytelling. She creates these characters, every single one of them who is so well developed, so believable and so memorable and addicting, and she puts them into this complex and ever looping stories that you can’t help but be glued to the pages the entire novel. Because here’s the thing: Sarah doesn’t just make you addicted to Celaena’s story, she makes you care about all of them, even the characters that aren’t necessarily “good”. Every character has his or her own story, and all of these stories sort of build together, pile on top of one another and make one gigantic story. And since we don’t get everyone’s point views, the story creates this long mystery, a mystery that never really gets solved. Things unravel, piece by piece, and when one piece is uncovered, another mystery is revealed. I think that is a magical thing, to be able to build a story like that.

I also really love that she is so fantastic at world building. You may have noticed that most of the books that I read are fantasy or sci-fi, and yet, what I actually write is contemporary. And that is because the world building of some of these authors is just out of this world, and I am daunted by the task of doing that. Some people just are better at this, and Sarah is a genius at it. She makes this world that is so familiar and relatable but creates in in a completely new universe. What I love about it is that she takes elements from different stories, different myths and cultures, things we’ve seen before and creates her own universe and that is the mark of a good writer. She takes things that we’ve all used, all these fantasy writers tend to be inspired by, and really does a great job of creating her own universe based on it. I think a lot of people think authors like J.R.R. Tolkien and J.K. Rowling and such all have brand new ideas, but they don’t. They take myths and legends, different aspects of religion, different aspects from different stories and they build their own universes from that. It shows talent and research and imagination and creativity and it is really accomplished in this world, and its so impressive.

I also just adore the characters that Sarah creates in these books. I love Celaena the most, especially after the way Sarah described her when I met her a few days ago. She is a unique heroine in that she has this strength, she’s a fighter, a warrior…an assassin who has an ease for killing, who was trained to kill and to be good at it, but she’s also lovely, calm, intelligent, addicted to books…and she’s super girly! She loves clothes, and looking pretty and shopping for clothes and perfumes. I love that. I love that she is capable of being both, because so many times I feel that female characters are either one or the other. Its the reason I love Isabelle Lightwood from the Mortal Instruments because she embodies that so it was nice to see that sort of kindred spirit in Celaena as well. I also love Nehemia, and the strength that the princess shows, the loyalty and passion and strength of Chaol, and the openness and genuine nature to Dorian. I even love Fleetfoot, Celaena’s dog.

Lastly, I love that there are so many depths of this novel. I love that it follows up this completely great debut novel, and it doesn’t disappoint. You sometimes wonder with an original novel, whether the sequel will be as good and this one doesn’t disappoint in this slightest. I love that it was completely worth the wait, and that it was a continuation of the previous story but it brought about new stories, new enemies while sticking to the conflicts of the previous novel. I also am attracted to the fact that there are SO many elements to the story: romance, action, adventure, revenge, fantasy, justice, drama, so MUCH. There are so many layers to the novel, and that is what makes it SO good. If I were to write a paper about this, there are so many angles that I could take on it, so many themes and so many conflicts and ideas going on in there. I absolutely love it and it makes me excited and anxious for more novels.

Yes. Of course. Especially if you’ve already read Throne of Glass. If you loved Throne of Glass, you’re going to read this book and wonder how it was even possible to get better than that, but it did. She took a book that was an amazing debut and made it even better in the sequel. I met her Tuesday (check out the pictures below!) and she informed us that there would be six to seven books in total for the series. I canNOT wait!

I hope you all enjoyed this week’s Book of the Week review!

Don’t forget to check out previous reviews here! And stay tuned for more awesome this weekend!

2 thoughts on “Book of the Week-Crown of Midnight”