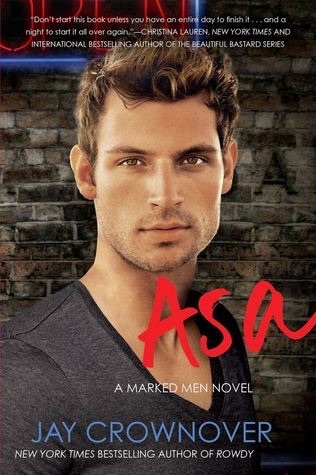 Book #6 in The Marked Men Series

Starting over in Denver with a whole new circle of friends and family, Asa Cross struggles with being the man he knows everyone wants him to be and the man he knows he really is. A leopard doesn’t it change its spots and Asa has always been a predator. He doesn’t want to hurt those who love and rely on him, especially one luscious arresting cop who suddenly seems to be interested in him for far more than his penchant for breaking the law. But letting go of old habits is hard, and it’s easy to hit bottom when it’s the place you know best.

Royal Hastings is quickly learning what the bottom looks like after a tragic situation at work threatens not only her career but her partner’s life. As a woman who has only ever had a few real friends she’s trying to muddle through her confusion and devastation all alone. Except she can’t stop thinking about the sexy southern bartender she locked up. Crushing on Asa is the last thing she needs but his allure is too strong to resist. His long criminal record can only hurt her already shaky career and chasing after a guy who has no respect for the law or himself can only end in heartbreak.

A longtime criminal and a cop together just seems so wrong . . . but for Asa and Royal, being wrong together is the only right choice to make.

Oh Asa. The finale of this series was so much fun, so emotional and just the perfect way to bring this entire family to a conclusion. I’m working on my own NA romance series and the last book of my series is going to involve a bad boy trying to redeem himself so I was excited to read this book, not only because its the conclusion, but because I was excited to see how Asa, who we meet in book two and see throughout the series, falls madly in love with a cop.

We meet Royal in book 4, Nash’s book, because she lives across the hallway from him. And immediately as soon as we met her, I knew I loved her. I knew she was going to be important. She’s gorgeous and sassy and hard working and obviously dedicated to her job as a cop. I love the connection she immediately has with Asa and I love her just period. She’s struggled with her mom, even though she loves her, she struggles with her guilty over what happened to her best friend and partner in the field and she struggles to figure out who she is and what she wants. She seems so confident and perfect in the other books but I love that you really get to see her in this book, and she’s flawed but she’s determined, and she’s incredibly determined when it comes to Asa, and seeing that he’s changed and worthy of love, and most importantly, worthy of her love.

Then you have Asa. See I love Jet and Ayden so I got a very negative first impression of Asa and even though Rome likes him, and he becomes friends with Nash and Rowdy and he’s obviously becoming a better person, its hard to get rid of those feelings about him. But once you’re in his brain and you can see what he went through and how he legitimately struggles to be a better person…its just so hard NOT to fall in love with Asa. He genuinely wants to be a better person; he does. But its hard for him, and its also incredibly hard for him because he’s determined that he’s a bad guy, he’ll always be that way and he doesn’t deserve anything better. That struggle keeps him from becoming the best person he can be and it prevents him from being the person Royal knows and wants.

But when they come together, and pick up the pieces and put each other back together, and fall in love…its just absolutely perfect. They both find a family and a new chance with each other and they are folded into the Marked family and oh, the feels were so real as I finished this book. I loved the way Royal and Asa were so magnetic and meant to be together and I love how they sort of saved each other but I also loved how everything from book one until this comes together. You see everyone in the Marked family come together, get married, start families and all of those things and I just can’t handle how it was just the perfect ending.

So…when are those Saints of Denver books coming out hmm? I’m ready for them ;)