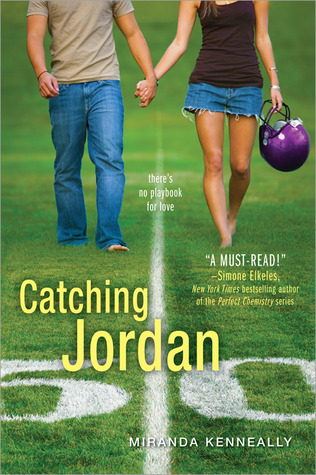 Book #1 of the Hundred Oaks Series

What girl doesn’t want to be surrounded by gorgeous jocks day in and day out? Jordan Woods isn’t just surrounded by hot guys, though-she leads them as the captain and quarterback of her high school football team. They all see her as one of the guys and that’s just fine. As long as she gets her athletic scholarship to a powerhouse university.

But everything she’s ever worked for is threatened when Ty Green moves to her school. Not only is he an amazing QB, but he’s also amazingly hot. And for the first time, Jordan’s feeling vulnerable. Can she keep her head in the game while her heart’s on the line?

I had a lot of incredibly high hopes for this novel. Really high hopes. When I heard it was about a girl that plays football and is goal driven on football and it had romance as she kind of falls in love for the first time…I was so sold. Especially since the rest of the series follows a bunch of other sports.

We know how I get when it comes to sports novels.

And I was just disappointed with the book. I loved the character of Jordan and I super loved the character of Sam Henry but honestly, no one else really sold the book for me. The concept was definitely there, and its what kept me turning the pages. It had a ton of potential. The story was there. You have Jordan struggling to prove herself as a girl quarterback, especially with her famous quarterback dad, and she wants them to take her seriously, but she also is a girl and has feelings for boys too and its HARD. The potential is there and I think that’s why the book was such a disappointment to me. It was RIGHT THERE.

The biggest issue I had with the book was that it was so incredibly rushed. Everything felt rushed and I had a hard time keeping up with everything. The writing felt rushed, the feelings, the story, the character development, all of it. It was like whiplash sometimes. The writing just felt like it was rushed. I wanted the author to slow down at times and just let me enjoy getting to know the characters and that sort of thing. Often times, I just felt nothing because I didn’t feel like I was given the chance to really care. It all happened too fast.

I’m definitely going to be reading book #2 because I always like to give an author another chance but I’m going in with less expectations than I had for the first book, especially since book two is that magical sport, baseball. Wish me luck!