After twelve long years, what Twilight fans thought would never happen, has happened…

When Edward Cullen and Bella Swan met in Twilight, an iconic love story was born. But until now, fans have heard only Bella’s side of the story. At last, readers can experience Edward’s version in the long-awaited companion novel, Midnight Sun. 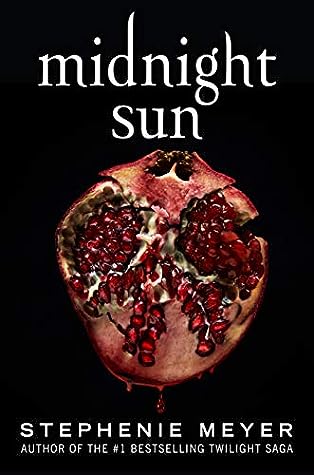 Re-telling of Twilight, Book 1 in the Twilight Saga

I did get my signed copy in the day I finished it though! 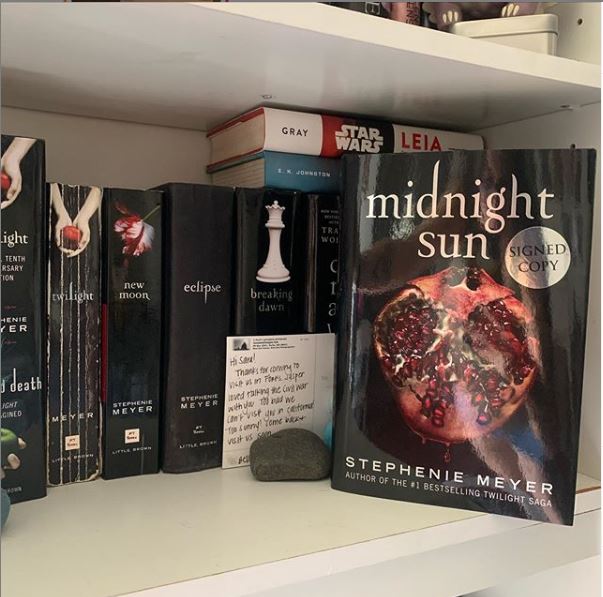 YOU CAN PURCHASE THE BOOK AT YOUR LOCAL BOOKSTORE/LIBRARY OR THE FOLLOWING LINKS:

When Edward Cullen and Bella Swan met in Twilight, an iconic love story was born. But until now, fans have heard only Bella’s side of the story. At last, readers can experience Edward’s version in the long-awaited companion novel, Midnight Sun.

This unforgettable tale as told through Edward’s eyes takes on a new and decidedly dark twist. Meeting Bella is both the most unnerving and intriguing event he has experienced in all his years as a vampire. As we learn more fascinating details about Edward’s past and the complexity of his inner thoughts, we understand why this is the defining struggle of his life. How can he justify following his heart if it means leading Bella into danger?

In Midnight Sun, Stephenie Meyer transports us back to a world that has captivated millions of readers and brings us an epic novel about the profound pleasures and devastating consequences of immortal love.

I, like many Twilight fans, have been awaiting the publication of this novel for years and years and years and honestly, I never thought we’d get it. I’d read the draft on Stephenie’s website a few times and I was sad that it just never seemed like it would be published because I thought the draft was really good and I’ve always thought that Twilight would be much better from Edward’s point of view because, frankly, I do think Edward is the more interesting character than Bella. I’ve been on a Twilight kick this year, with visiting Forks, La Push and Port Angeles back in February and Tracy Wolff’s Crave releasing this year and driving UP the Twilight nostalgia. Stephenie coming out of hiding and announcing the release of Midnight Sun just sent this Twilight fan into bliss. I immediately pre-ordered both my ebook and my physical copy – because I am impatient and hate waiting for the physical copy to come in – and anxiously awaited the release date.

I was right though – Midnight Sun IS much better than Twilight.

Now, there are many things that I think go into that. For one, this book came out just a few days ago, in 2020, fifteen years after the first book came out. I think of how I was writing fifteen years ago and I shudder at the thought. Twilight wasn’t written that well, we all know this, even fans, but it didn’t necessarily have to be and its unfair to compare the YA books of 2005 to those of 2020 because our standards as writers and readers have just gotten better because the YA market is more saturated than it was back then. You can tell in this book that Stephenie has genuinely gotten so much better as a writer and that she’s very aware of that and works really hard for that. Even compared to the draft she had on her website for ages, this book is just a much better, tighter, more fleshed out story and I have a lot of respect for her. I am not sure Midnight Sun would do so well if she hadn’t waited this long.

But I also just think that I enjoy watching Edward fall in love with Bella more than I enjoyed watching Bella falling in love with Edward. When I was 17, I felt exactly like Bella – I felt lonely, lost in the crowd, so not special, just a girl with brown hair, brown eyes, clumsy, who likes to read. There isn’t much DEEP about Bella other than her kindness and her constant willingness to take care of others. But that’s what made Twilight work SO well – every teen girl felt like this and to see this wonderful boy through the eyes of Bella fall in love her felt like having someone wonderful fall in love with us and it was magical.

Now that I’m older, its harder to read that and harder to connect with that as much as I did all those years ago. On the other hand, Edward is this incredibly unique, special person who has lived for decades and has seen so much and experienced so much and Bella just seems so much…MORE in his eyes than in her own and I really liked that. I’ve always been a fan of the side characters in Twilight more than the main characters but this book did make me like Bella a WHOLE lot more because you see her so differently in Edward’s eyes.

It was also just great to see things from Edward’s point of view. I kind of giggled at him watching Bella while she slept – I think that was something that’s been touched on quite a bit in the past decade and I think Stephenie took a shot at trying to justify it and it felt sort of silly so I giggled but that was fine. I liked seeing more of Edward’s life BEFORE Bella and his relationship with different members of his family and different moments in his past. He’s just so much more interesting than Bella – no offense, Bella, love you! – and it was great to see that. He becomes so much more than what we see through Bella’s eyes and I really, really truly liked that a lot. I liked hearing Edward’s voice and because characters like Jasper and Emmett are my favorite, I liked getting to know them more too. I stand on my ground that Twilight is better from Edward’s point of view – I liked this book SO much. I will say also that being in Edward’s head as he races to Phoenix to save Bella from James was so GREAT because it was truly a big part of the book that we don’t see Edward at all because they are separated and I loved it – it might have been my favorite part.

The only thing I would say, and this isn’t the end of the world, is that its not a quick read. I read it in about two days, mostly because I was on a very relaxing, covid-safe vacation BUT its not a book that you start reading and NEED to finish because…well, you know how it ends already! Even with Edward going back and forth on whether to stay with Bella or not, we know he leaves in New Moon and we know he comes back and we know that they get married and we know that Bella becomes a vampire and they live happily ever after so there’s no…anxiousness to find out what happened next. Its definitely not a bad thing. However, I would say that if someone had never read Twilight EVER, which is still common, I would suggest reading Midnight Sun and then Twilight and so on. I think Midnight Sun is the stronger book and I think genuinely, it would convince more people to read it.

All in all, I think the book was absolutely worth the wait. It solidified my love for the series and Stephenie Meyer and it made me HAPPY and it was great to be a part of that story again. The love story was just as cheesy and wonderful as it was when I was a teenager and I’m glad I was able to get different points of view and learn more about Edward and the Cullens and it was truly great to just be back in that nostalgia.

I kind of want to read it again now…