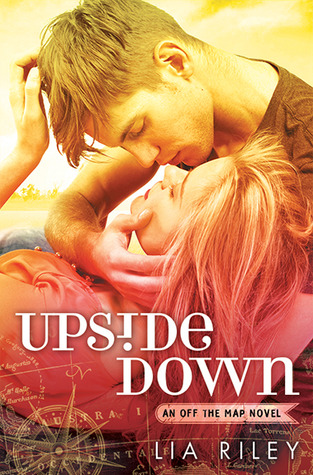 Book #1 of the Off the Map series

Twenty-one-year-old Natalia Stolfi is saying good-bye to the past-and turning her life upside down with a trip to the land down under. For the next six months, she’ll act like a carefree exchange student, not a girl sinking under the weight of painful memories. Everything is going according to plan until she meets a brooding surfer with hypnotic green eyes and the troubling ability to see straight through her act.

Bran Lockhart is having the worst year on record. After the girl of his dreams turned into a nightmare, he moved back home to Melbourne to piece his life together. Yet no amount of disappointment could blind him to the pretty California girl who gets past all his defenses. He’s never wanted anyone the way he wants Talia. But when Bran gets a stark reminder of why he stopped believing in love, he and Talia must decide if what they have is once in a lifetime . . . or if they were meant to live a world apart.

I’m not going to lie. It took me awhile to get into this novel. My friends and I recently started our own little version of a book club, and this was my choice for the club. It caught my eye at Target and it had a blurb from JLA, who I adore so much, so I decided to read it. I ended up really really liking this book but I must admit, it took me a bit to get into it.

It starts off slow and I think that’s the problem with it. I have a hard time connecting with Talia right away and I’m not sure why that is is. She’s similar to me in ways and she lives in California, in a part of California that I’ve been lucky enough to visit, and, funnily enough, is the basis for the fictional town that I’ve created for my own NA series. Its not until she’s in Australia, going to school, and still struggling with the things she tried to escape in California…that’s when I finally connect with her. She’s sort of run away from her problems but her problems have followed her and the book becomes about her facing them head on and that’s when I finally got hooked. Her struggles, her insecurities, her anxiety and OCD….that is when she became a real person to me.

Then enter Bran. Who, by the way, is sexy as hell, and now I really want to go to Australia and meet a tortured Australian boy who will show me an amazing time in bed. Moving on, I adore his character. I love the tortured boy thing a lot and we know there’s a lot going on there with Bran and its frustrating but it only makes you love him more. He has trust issues, he’s had his heart broken before and he obviously has this connection with Talia but he’s unwilling to just take the plunge.

The two of them have a lot to deal with it, especially when it comes to the past. When they connect together, it takes a lot of time and a lot of push and pull, but they eventually are able to open up to each other and share their struggles and become closer because of it. Their romance is beautiful and heartbreaking all the way to the last page. I didn’t realize that this was a series and even though the ending of this book is absolutely beautiful, I know there’s much more that these two have to go through in the future and I can’t wait to dive into book two and read more about them.