Today, I made blue milk from the movie, Star Wars: A New Hope!

I love to read about food in books and I love food in movies and TV shows. I’ve always wanted to try making them but I’m honestly a terrible cook – I rarely make anything without heating something up easily in the microwave or the stove. I am not nearly as creative as some of the amazing people on the internet who come up with some amazing fictional food recipes! So I decided to approach it from a different angle – a sort of fandom foods for dummies. I would find a recipe for some of my favorite food in fiction and try them out and share it with you! Are they easy? Are they doable? Did I mess up? Did it taste good?

And, of course, I’ll always give credit to the recipes that I try out!

If you’ve ever watched Star Wars, you know that the universe isn’t exactly known for fictional food – in fact, you don’t see characters eating THAT often. But of course, everyone knows blue milk. It’s a quick shot of Luke pouring and drinking it at a meal with his aunt and uncle but it has been iconic over the years.

Now that both Disneyland and Walt Disney World’s Galaxy’s Edge has opened, you can actually try blue milk and I have! Its definitely not what I expected but its enjoyable. What I’ve made for us here though is a recipe off the official Star Wars website, posted before the opening of the lands, before an actual blue milk was created so I decided to give it a try! You can try the official recipe here!

The Ingredients –  For One Serving – 1.5 Cups of Whole Milk, 1 TB of sugar, 1/2 tsp of vanilla extract, drop of blue food coloring 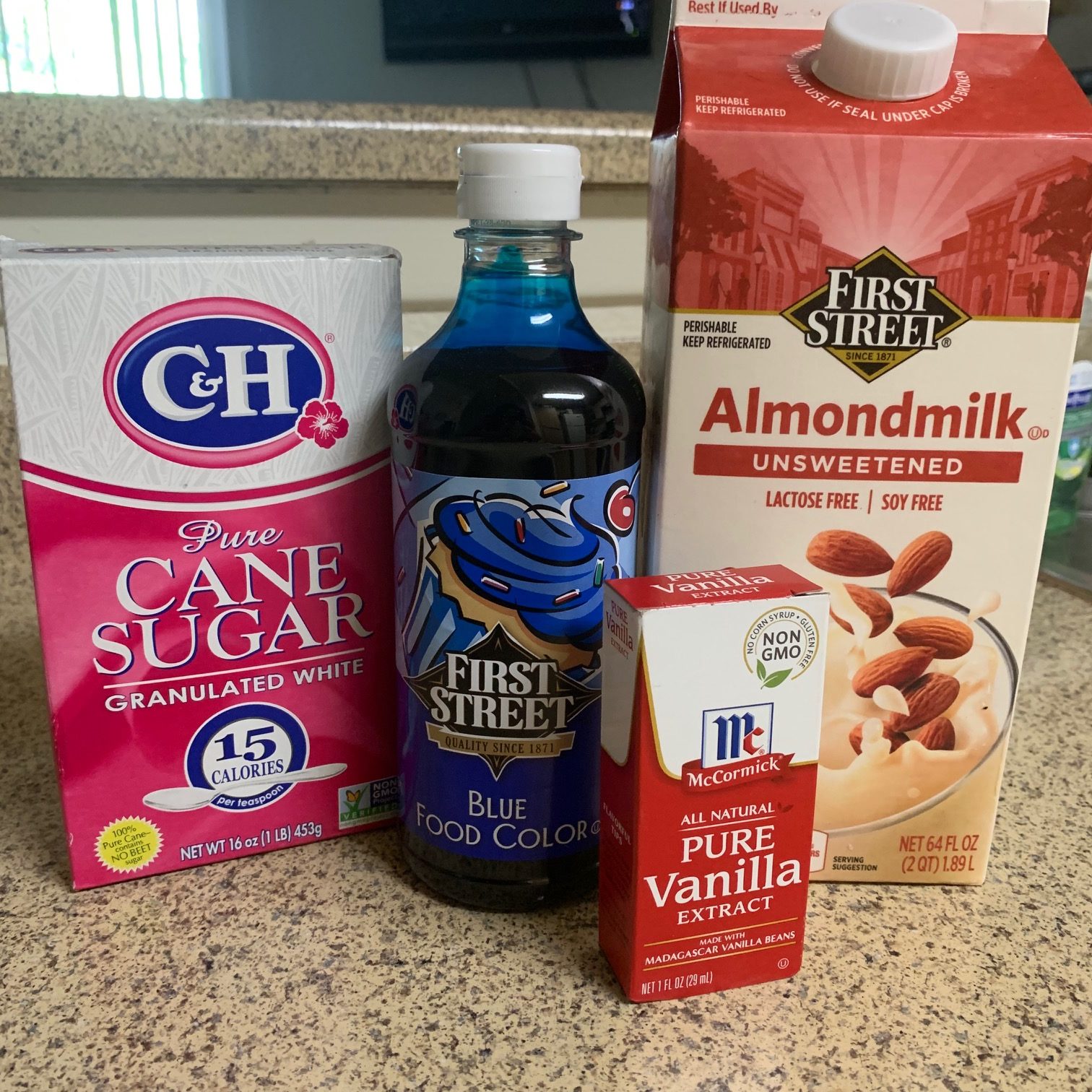 Cost To Me – I had all of the ingredients but if you were to purchase them, I would say less than $10. The most expensive thing is the vanilla extract.

Time It Took – It took all of about five minutes to make one serving – if you’re making more, I bet you could adjust the recipe for a punch bowl sort of thing but either way – SUPER quick.

EASY. Literally just had to pour the milk, stir in the sugar and vanilla – stir well so the sugar mixes – and then add the food coloring. It was kind of cool to watch the milk turn blue, it was like making chocolate milk as a kid. I definitely got a little thrill out of it. It was darker than the screen version or even the theme park version but I put very little food coloring in it so I think that was just the way it was going to be.

It was actually super good and much more of what I would imagine that blue milk would taste like. The blue milk at the theme park tastes like a smoothie, sweet and fruity. This tasted exactly like the milk in your cereal bowl once you’re down with your cereal – like after frosted flakes or fruit loops or something. It was super good and very nostalgic tasting. The only reason that it doesn’t get a full five stars is that I used regular sugar instead of Splenda or Stevia – I’m diabetic – and it was SOOOO sweet. I’m not used to sweet things so it SUPER threw me off at how sweet it was. I would say maybe cutting the sugar in half or using a substitute. 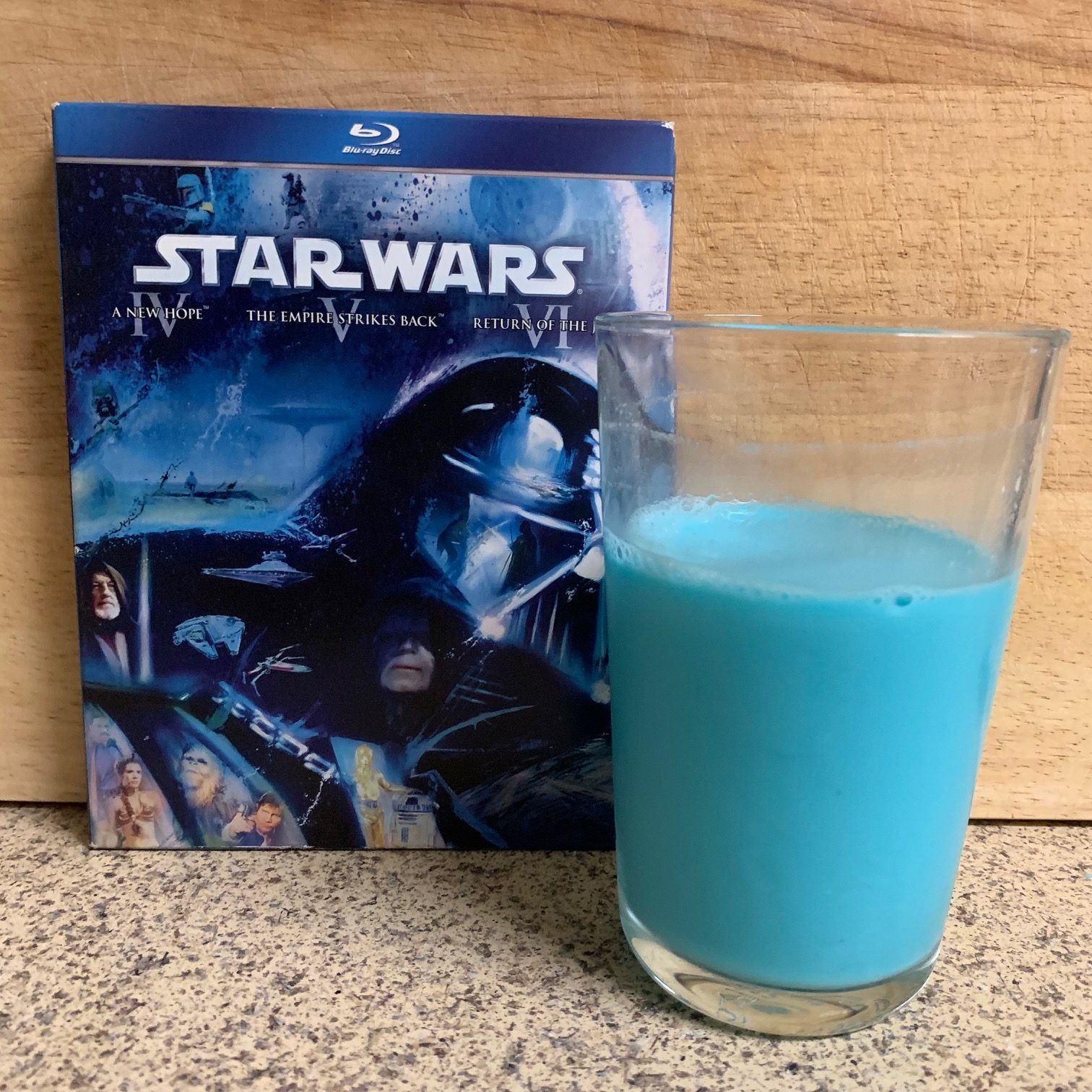 Now, looking at the picture, I’m kind of pleased at the color blue that it turned out. Again, much brighter and darker than the blue milk in the movie and theme parks but it looks really cool and it goes so well with my copy of the original trilogy! All in all, this is the easiest recipe that I’ve done so far and I definitely recommend it. If you’re having a Star Wars themed party, its super simple and easy to make and genuinely delicious! 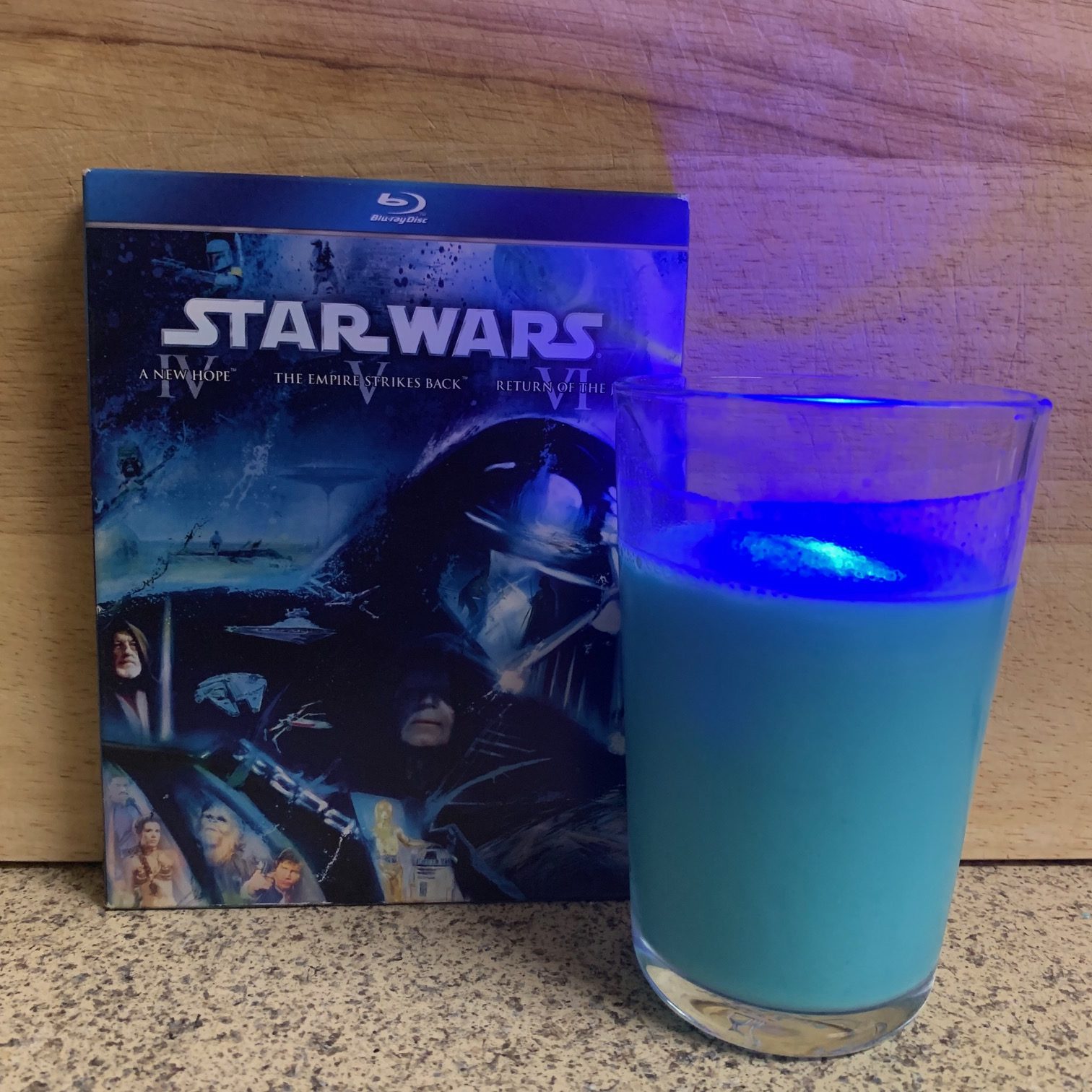 I had to take a picture of it with my light up cube from Trader Sam’s, a gift from my favorite skipper, Ramon! Look at how cool it looks!

Don’t forget to check out the official Star Wars website for other ways to try blue milk – including smoothies and teas and lattes! I really wanted to try the smoothie but I don’t have a blender – next time!