If you guys are interested in becoming a guest blogger for the Fandom Friday, feel free to email me at whatanerdgirlsays at gmail.com or contact me HERE.

Ha! Its technically still Friday here! I am quite proud that I made it! I know that it has been awhile since a Fandom Friday was posted and I swear that I am trying to get better at this weekly post. I know that I am really good with the other so I promise to show the same dedication to this one as well.

This week’s guest blogger is Jackie from Seeking Bazinga and she is here to write allll about one of my favorite shows, Firefly. Enjoy!

I came into the Firefly fandom later than a lot of fans. I missed the original airing on Fox, which according to those who DID see it, said screwed up the viewing for almost everyone. The episodes were shown out of order. Not all the episodes were shown. They were cancelled early in the season, and only made 13 episodes. I heard they even changed the night and time it was scheduled for, and they just didn’t see the numbers they wanted and POOF!

And there were so many of us that hadn’t even known it had been there.

But we got lucky. Someone we knew, in my case it was my soon to be sister in law, had the DVD’s. She couldn’t believe we hadn’t seen the show. She sat us down, sometimes duct tape was needed, sometimes not, and put the DVD’s on and forced had us watch the first disc. Not even the first episode. The first disc. Which is a fair commitment to TV as the pilot is 86 minutes long. And then there are two more episodes on the disc. But, I have to tell you, after you get finished with episode two, “The Train Job,” you’re hooked!

The Train Job shows the amazing directorial skills of Joss Whedon and the AMAZING ability of the actors to banter and show off their comic timing.

But the best part of the Firefly ‘verse? The fans. 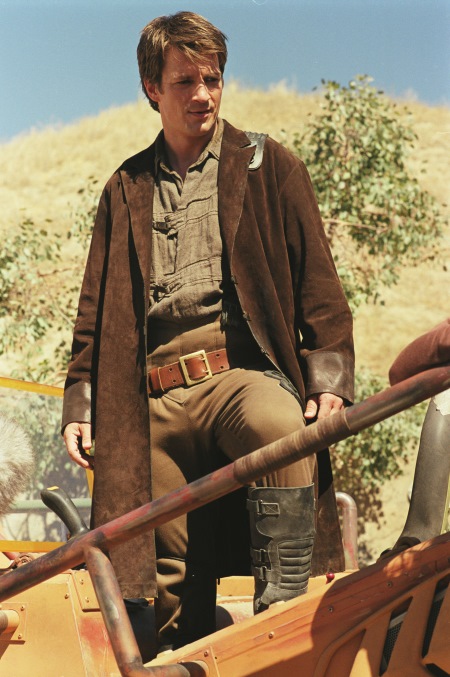 Firefly made more fans after it was cancelled than while it was on the air. The DVD sales spread like wildfire because of word of mouth. And then the Browncoats became many. And they remained vigilant. And then, three years later, because the fans would not let the show die, Serenity the movie was made. And still, the Browncoats are hard core. We will never go away, we will continue to stay faithful.

In fact, I asked several of my friends why they were Browncoats. It’s very simple.

Vince:
Because you can’t stop the signal, is why.

Matt:
Because I am a leaf on the wind. Watch how I soar.

Brandi:
Because no power in the ‘verse can stop me.

Mindy (My sister in law, and the reason I am a Browncoat):
Done the impossible. That makes us mighty

Susan Fox of Krypton Radio:
I liked Joss’ previous work [Buffy/Angel] so I picked up on this from the first episode. I thought it was a brilliant treatment of the future with some very realistic guidelines, like “no aliens” and a credible post-civil war scenario.

Dr. Tanya Mueller:
I’m not sure if I’m a true browncoat but an appreciator for sure. I like strong female characters and witty dialogue.

Cat Carter also of Krypton Radio:
I am a Browncoat cus I am a sassy-mouthed rebel grrrrl living under the supposed headship of a self-absorbed ‘leader’ and I am doing my own thing in spite of him….so I can really resonate with the Serenity crew….you can’t take the sky from me!!!

Nova:
I wouldn’t call myself brown coat either, though I loved the series and movie. I would put it on my watch list if they revived it. But I haven’t read any Firefly fan fiction or anything. It was well written and a lot of fun!
Tuesday

Kendall:
I just worship the ground Joss walks on…

Jessica Zipay (soon to be member of Nerds in Heels, coming soon!):
Hmmm, I don’t think I’d call myself a browncoat either, but I totally support their efforts and I love the series. I still have to watch the movie but I’m sure I’ll love it, too!

The fans, even the ones who aren’t hard core Browncoats, are appreciators of the series. We adore the show. We loved the movie. We are not going anywhere. We just get stronger and more adamant.

In fact, most of the cast, even though they all have had and/or are working on other shows, would reunited for more Firefly. And no one is a bigger Browncoat than Nathan Fillion, Captain Malcolm Reynolds himself. When he sees Browncoats at cons, or just out, he almost always stops to say hi and chit chat.

I was lucky enough to meet most of the cast and the great Joss Whedon at the movie premier of Serenity. I’ve never been surrounded by a nicer group of actors in my life. And because they all adore each other, and they adore Joss, they do damn near anything for the man.

There is a reason Joss Whedon is my master now….

So, if you haven’t watched the show…try it. Commit to disc one. And if you’re not a fan? You might need to turn in your geek card!

I hope you all enjoyed this week’s edition of the Fandom Friday. Don’t forget to submit your own posts for the Fandom Friday! We want to learn alllll about different fandoms, and you can learn about the ones we’ve already covered here.

Also, check out the last Fandom Friday post all about the show, Supernatural, also written by Jackie. I know, I’m getting bad at this post but I promise I will get better!

3 thoughts on “Fandom Friday-Firefly the Fandom”