Cartoonist Jane Harris is delighted by the prospect of her first-ever trip to Europe. But it’s hate at first sight for Jane and Cal Langdon, and neither is too happy at the prospect of sharing a villa with one another for a week–not even in the beautiful and picturesque Marches countryside. 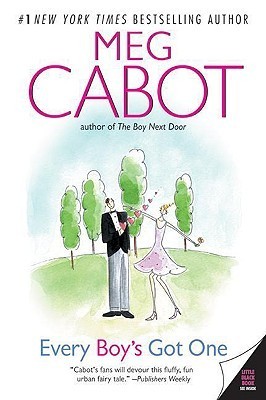 3rd in the Boy series – however, each book stands alone

Borrowed Ebook From Library – I do own physical copy.

Cartoonist Jane Harris is delighted by the prospect of her first-ever trip to Europe. But it’s hate at first sight for Jane and Cal Langdon, and neither is too happy at the prospect of sharing a villa with one another for a week–not even in the beautiful and picturesque Marches countryside. But when Holly and Mark’s wedding plans hit a major snag that only Jane and Cal can repair, the two find themselves having to put aside their mutual dislike for one another in order to get their best friends on the road to wedded bliss–and end up on a road themselves … one neither of them ever expected.

I’ve been reading Meg Cabot since the first time I picked up a copy of the original Princess Diaries book when I was 12 years old. I’m nearly 31 now so that’s a lot of years of reading the darling Ms Cabot. What I’ve always adored about her is her casual style of writing, her way of reaching out to the reader as if they’re a part of the story and confiding in them, like a best friend. I’d never read a book like that before, and that’s how I write, so I can’t even begin to explain the profound impact that Meg Cabot had on me, in all my writing endeavors.

What I continue to love about this book is Meg’s ability to create an entire story, funny and witty and entertaining, without ever leaving the medium of emails and Blackberry messages (my.god.this.book.is.old.) and journal entries. I love the scattering of restaurant menus and various receipts. It just works. The fact that she’s pulled this off in not one, but four books in the series is just great. I love it. I love that this was sort of the early new adult genre, and was so HUGE in chick lit. It was funny and lighthearted and often times, I need that after a rough or emotional read.

What hit me when I was reading this though – and its been a few years since I’ve reread it – is how…kind of totally irritating I found Jane to be! She’s just…well she’s obviously not my generation, which makes sense. I believe Jane is 28 in the novel and at that time, I was only about 16. I’m older than Jane is now but the way she acts all the time is so frustrating. She seems extremely one dimensional with no real cares other than her cartoon, her cat and her best friend but none of these things feel real or fleshed out. I try not to judge her for her thoughts – I mean, I adore pop culture more than most – but she seems shallow and unintelligent a LOT.

She also is TOTALLY slut shaming and I have a really hard time with it. She calls girls skanks and whores and such and totally rips into a woman who comes to visit Cal for the night. If this is consenting, safe sex between adults, more power to them. Yes, it could be that this is Jane’s reaction because she has feelings for Cal that she’s denying but still, its just a gross thing. And I’ve noticed it with other Meg Cabot characters as well – they can be kind of anti-feminist and anti-girl power and I know for a fact that Meg is NOT like that so its just really frustrating to read as an adult. As a teenager, I was probably cheering Jane on.

In the end, I definitely still enjoy the book but maybe not as much as I used to. Its a fun and lighthearted romance novel that can be a little shallow sometimes but its a delightful read. I’m not sure if I’d read it again in the future but I have high hopes for Meg’s new adult book, No Judgments, coming this year.