I wanted to say something.

The world is intense right now. There’s no other way to describe it other than intense. Chaotic. A total mess. But the thing is – I don’t think its new. Its always been like that but its taken people in the streets for others to see it. Racism. Violence against people of color. Police brutality. Its been happening for years and years and years and people are fed up. They’re tired of it.

It feels weird to think about books or writing or any of that at this moment, and that’s with my books being released in less than two weeks. It feels like…such small things next to what is going on. I know what its like to have people judge you because of your race. I know what its like to fear for your life because you’re not sure if the person in front of you has good intentions just because your skin might be brown.

So I understand the anger that black people have. God, I share that anger. I’ve spent the last week in just a cloud of anger. I’ve had to remember to take care of my own mental health as well because I’ve just been buried in anger. Anger.

I’ve been in a haze of anxiety, anger, depression, all of that this week. I’ve donated, supported so many black businesses and have posted resources and opinions all week. I can’t stop speaking up because of how angry I am. I’m tired of people at the border living in cages. I’m tired of black men and women dying for nothing more than just being born with the color skin they’re born with.

Of course they do.

But right now? Black lives are what matters. Their lives are treated as less than others and THAT IS NOT OKAY. PERIOD. This blog believes in black lives matter and if you’re not on the same page, you probably aren’t someone that I really think should follow this blog. 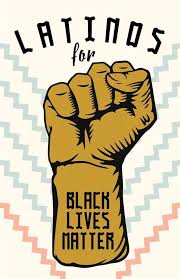 If you do believe Black Lives Matter, I hope you’re taking this time to show your support in some way, shape or form. Not all of us can be out on the front lines, protesting, though I have the utmost respect for every single person out there, fighting the fight, especially with the police showing their brutality, again and again and again, instigating worse fights during peaceful protests. I work in healthcare and can’t afford to get hurt or sick, but I wish I could be out there. There are ways of showing your support though, and I’ve listed some of the ways below.

Stop and listen to the stories of people of color around you. Let those who have experienced racism, who have grown up knowing nothing less than constant racism, speak their narratives. Listen and learn – even the best of us, even those of us who are people of color can still learn and listen

Don’t take over the narrative but show your support. Don’t just sit in silence because you think you have nothing to say or you are afraid to say anything. Share that you’re an ally, share resources and information that you find. Speak out against those you know, like friends or family, when they are showing signs of racism. Its not enough these days to just be not racist. You need to be anti-racist. You need to call out those around you who are racist, even if its not so obvious.

Black businesses are often hit even harder during times like this because, well, racist people boycott them. They boycott them anyway but they do even more when they find out these businesses are owned by black people during times like these. Find out what businesses near you are black-owned and support them! Donate to them, order food from them and so on. Here is a list of black owned bookstores that you can support

Pay for their music. Read their books. Really stop and take a look at their art. They write and create what they know and their voices deserve to be heard in every aspect. Sometimes its directly related to racism, like The Hate U Give by Angie Thomas or Dear Martin by Nic Stone, and sometimes they’re just beautiful books featured black main characters, like The Belles by Dhonielle Clayton or Everything Everything by Nicola Yoon. Here are some YA books by black authors to check out. And here are even more books to read about racism and black history.

Do the Work. Be Better.

Can I be honest as a person of color? I know I am and I know so many others are – we’re tired of teaching you about racism. Its honestly not our job at this point to teach white people about racism and how to be better. We – especially black people, but brown people too – have been working for too, too long without being paid, without being treated as equal and we don’t want to keep working without pay and to teach you how to be better. We live in an age where information is constantly available at our fingertips – Google. Read. Learn. Stop asking your black friends, your brown friends, your Asian friends, your Native American friends and so on how you can be better. Take the time and be better.

One of the biggest ways you can support Black Lives Matter right now, politically, is to get involved in 8 Can’t Wait – 8 ways that cities can decrease police violence by 72%. You can find out more on their website here – and it can give you ways to reach out to your local officials to call or email them and let them know that you want them to speak up and make changes. Sign petitions. Call and email your local representatives. VOTE. I can’t say enough how insanely fucking important voting is. VOTE out those who are okay with what is happening. VOTE VOTE VOTE. Primaries are happening right now and in just a handful of months is a HUGE election. VOTE.

There are so many other ways you can help. I’ve given you a lot of options above and know that they are so many more options. Do the work. Listen. Speak up. Know that this is so incredibly important to know and keep the fight up. Its not enough to post a black square on your social media and go quiet. Speak. Up.