Happy Friday everyone! The best day of the week in my opinion and today is no exception since I’m bring you not one, more about not two, viagra dosage but THREE awesome interviews with three equally awesome YA authors. Lets jump into the first one, with one of my absolutely favorite people ever, Brad Gottfred :) 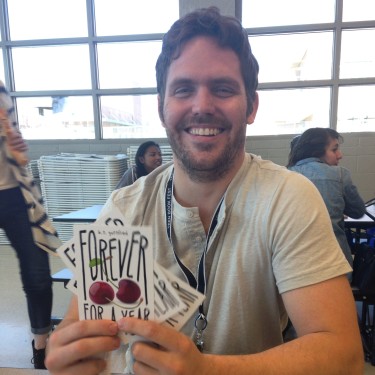 Taken from Brad’s website: Wrote and directed the play, “Women Are Crazy Because Men Are A**holes” that has played over four years in Los Angeles and Chicago and just made its Off Broadway premiere at the historic Cherry Lane Theatre. Los Angeles Times said: “Seldom have I been a part of a more enthusiastic and vocal audience. Checkout https://loanize.co.uk for more details, Brad T Gottfred’s play about young couples stumbling through the minefield of codependency taps a universal nerve.”

Wrote, directed, and executive produced the feature film “The Movie Hero” which played at over 20 film festivals worldwide, winning numerous awards including First Prize at the Rhode Island Film Festival and the Audience Award at the Austin Film Festival.

My first play, “Marry, F**K, Or Kill” was called “a guilty pleasure for veterans of the single life” by the Los Angeles Times. It went on to an Off Broadway premiere in the fall of 2011.

First web series “Sex and Love Conspire to Destroy the World” was released by MyDamnChannel in 2013.

My first-ish novel, “Forever for a Year”, was released in July 2015 by Macmillan/Holt. My second-isa novel, “The Nerdy and The Dirty” arrives November 2016 from Mac/Holt.

You Can Find Him: This book comes out in November 2016. I just started reading it and I already totally love it! Add it on GoodReads and preorder it on Amazon and Barnes and Noble.

Pen Lupo is sick and tired of hiding who she is. On the outside, Pen is popular, quiet, and deferential to her boyfriend. On the inside, however, Pen is honest, opinionated–and not quite sure that she’s like other girls. Do they have urges like she does?

His classmates may consider him a nerd, but Benedict Pendleton knows he’s destined for great things. All he has to do is find a worthy girlfriend, and his social station will be secured. Sure, Benedict is different–but that’s what he likes about himself.

When fate intervenes, both Pen and Benedict end up at the same vacation resort for winter break. Despite their differences, the two are drawn together. But is there such a thing as happily ever after for a nympho and a nerd?

Brad: Because the not-really-a-secret of the universe is that no matter how old you get, you’re always a ‘young adult’ inside and so this allows me to express all my crazy emotions while not-so-secretly-hiding them in the lives of teenagers.
Nerd Girl: What are some of your own favorite YA reads?
Brad: I fall in love with strong voices, ones so vibrant that you can feel them thinking inside your own brain. ‘Catcher in the Rye’ is the parent of all such books. Sherman Alexie’s ‘Absolutely True Diary of a Part-Time Indian’ was a recent favorite.
Nerd Girl: What do you think is a big misconception about YA and why do you think its wrong?
Brad: That all the books are the same. The variety is just as wide and interesting as work for ‘adults’. (Note the quotes are the word ‘adult’ ;)
Nerd Girl: Why do you think its important to have a “I Read YA” week?
Brad: All of us ‘adults’ will be forever dealing with issues that first rose in childhood so it’s vital everyone encourages everyone else that they should be proud they are exploring these issues through YA.
Nerd Girl: Describe your latest work in five words or less.
Brad: Brainy boy, fiery girl: collision
Nerd Girl: You have worked in both theatre and fiction. How do you tackle each one? What are some similarities/differences?
Brad: Both require me to be relentless in my pursuit of honoring the authenticity of the characters. In fiction, I get to explore their inner life a thousand fold while in theatre I have to reveal character through their interactions with others.
Nerd Girl: Do your kids have any influences over the stories that you create/do you think they will influence you in the future?
Brad: Much of what draws me to stories are wanting one-of-a-kind characters to have a voice and a place in the world. And I hope my kids feel empowered to be their own kind of one-of-a-kind ;)

Thank you again Brad for lending yourself to What A Nerd Girl Says to celebrate I Read YA Week! You are awesome and I can’t wait to get my hands on a finished copy of The Nerdy and the Dirty!

Don’t forget everyone, head to my instagram to enter my I Read YA Week giveaway, which includes two YA contemporary ARCs and a TON of signed swag!. Checkout loanblues com for more details.