Welcome to the Fandom Friday!

This week’s Fandom Friday, is by Shaina over at The Urge to Write, all about Star Trek.

Shaina started blogging last year to get back to writing fiction, something that has always been her passion. She’s found that blogging is also another great way to network with other writers and nerds and to sound off on all of her obsessions. Some of these include Once Upon A Time, The Vampire Diaries, Harry Potter, anything written by Karen Marie Moning, YA paranormal romances, Star Trek (duh), and David Bowie. By day she’s a PhD student.

Over at my blog The Urge to Write, I have a weekly post I like to call The Sunday Showdown. Well, as you are well aware, it’s not Sunday, but this format is a fun way for me to pit my two favorite Star Trek series against each other: The Next Generation (TNG) versus Voyager. Now, my fellow Trekkies would probably agree with me that TNG is the clear winner; however, Voyager holds a special place in my heart, and it gets a lot of slack -some of which I don’t think it deserves. Read on to find out more about why I love both of these shows, and be sure to share your thoughts at the end!

1. Star Trek: The Next Generation

Seriously, it’s hard to beat TNG. In my opinion, it’s possibly the best show (or at least among the best shows) to ever grace 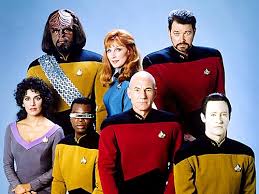 television. Much of this probably has to do with the awesomeness that is Patrick Stewart. He has such a commanding presence in everything he does, but especially in TNG. He has a distinct, easily recognizable, beautiful voice. (I might be crushing, just a little.) And -even though it probably annoys actors slightly to hear this, because they want to do other work -he is Captain Jean-Luc Picard. I know that The Original Series is special for a lot of people -and it is for me, too. But when I see Captain James T. Kirk, my first thought is: Oh, it’s William Shatner, as Captain Kirk. When I see Patrick Stewart, I’m all It’s Captain Picard!!!!!!

OK, Patrick Stewart isn’t the only good thing about TNG, although his mere existence does quite a lot. Along with some new missions and new foes, the Enterprise crew also tackles thought-provoking ethical issues that compose much of the core of the Star Trek franchise. (Something that was lost in J. J. Abram’s adaptation, although it was highly entertaining and adventurous.) Lovers of more traditional, hard-core sci-fi, so to speak, will love that the show focuses on the interactions between civilizations and the related conflicts, ethical dilemmas and alliances that may result. Sure, there are stand-alone episodes that feature potential romantic relationships, but romance is not a persistent theme. (I’m fine either way, as you will see in my discussion of Voyager below, but I 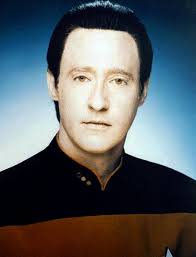 know that many lovers of sci-fi hate when romantic relationships are brought into the mix.) Many of the more philosophical episodes also revolve around Data, the Enterprise’s resident artificial intelligence. Next to Captain Picard, Data is definitely the next best character. Not only does he provide some comic relief, but I love his constant search to understand what it means to be human, and there’s always the question of how human Data really is himself.

TNG also has one of the best alien nemeses, The Borg. (Does anyone not know where the phrase “Resistance is futile” is from?) Instead of an individual villainous character or an alien species composed of individuals, The Borg are really a collection of species that have been  joined to the hive mind (the Borg collective) and are driven by efficiency and perfection. The hive mind isn’t a totally original concept, but The Borg made for an excellent enemy on TNG and other Star Trek series since they are really unlike anything else you would encounter in the Star Trek universe. You’re not dealing with a complex individual that has personal motivations, hopes, fears, grudges, etc. -instead, you have this massive group of cybernetic organisms that function as one mind. (The introduction of the Borg Queen sort of disrupts this idea and seems to serve to “humanize” them, which always annoyed me.) The Borg are also the main enemy in Star Trek: First Contact, my favorite movie featuring the TNG crew and tied for first with Star Trek: The Voyage Home as my favorite Star Trek movies of all time.

As I mentioned, Voyager gets a lot of slack, much of which I am going to attempt to counteract. Actually, I love Voyager. Not as 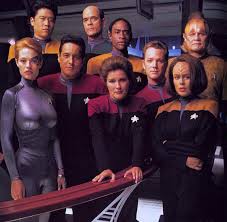 much as TNG, but I love it. Yes, Threshold is an infamous episode, for good reasons. But the seven seasons of Voyager do have other delightful things to offer.

For those of you who don’t know, the basic premise of the show is that the starship Voyager gets lost in the Delta Quadrant, and its crew spends seven seasons trying to get back home. Well, we don’t really have one crew, we have two, at least in the beginning: the Voyager crew, captained by the strong, formidable and female captain, Captain Kathryn Janeway, and a rebel crew lead by Chakotay. At least in the first two seasons, there is a lot of tension between the straight-laced Voyager crew and the rebels. In addition to Captain Janeway, the other ladies of Voyager -B’Elanna Torres, Kes and later Seven of Nine -are also strong characters. On one hand, Seven is Voyager’s stereotypically sexy leading lady, but on the other, she’s an ex-Borg, so she has all of the knowledge of the Borg Collective. Which means she’s also incredibly intelligent. I think she’s kind of a bad ass.

Voyager also has, hands down, the best doctor on any of the Star Trek series: the stubborn and arrogant Emergency Medical Hologram, a. k. a. “The Doctor.” (LOL, Doctor Who fans.) First off, actor Robert Picardo is just amazing and has such flawless comedic timing. His character is sort of like Dr. House in that he is insanely smart (he is an artificial intelligence, after all) and therefore kind of stuck up and hard to get along with. But he and Seven together serve as Voyager’s Data. Some of Voyager’s more philosophical episodes revolve around The Doctor’s personal growth as he interacts with the human crew. He may be a computer program, but in many ways he seems startlingly human. And as far as this showdown goes, he definitely beats TNG’s Dr. Beverly Crusher, who for some reason I never really liked. She was always the weakest link on TNG to me… 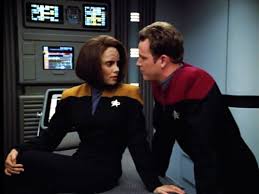 OK, now I’m kinda going to go into rant mode. These certainly aren’t the only reasons that some people dislike Voyager, but at least in part it annoys people because we have a bit more focus on romantic relationships and seemingly more episodes with relational themes. One prominent example is the love-hate relationship between B’Elanna and Tom Paris, which is a pretty constant theme in the show. Are they going to get together or not? Not a typical question we usually ask ourselves on this kind of show. But this does not make it a bad show. I am so sick of people putting down themes that women may tend to like (romantic relationships as one example). It’s annoying if romance and related themes are the only things women are expected to like, but there’s nothing wrong with being a woman (or a man) and liking these things. As a sci-fi-loving gal, I loved the adventure in Voyager, I loved the ethical dilemmas, I loved the more philosophical questions it brought up -but you know what? I loved the B’Elanna and Paris dynamic, too. I couldn’t wait to see whether those two would get together or not. (I won’t spoil it for you.)

As you can tell, I love me some Star Trek. ;) I’m also super excited for the next J. J. Abram’s movie, Star Trek: Into Darkness. I try to keep his re-envisioning of the Star Trek universe separate from the classic shows we hold dear. They are action-packed 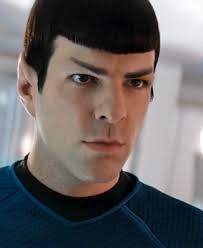 and have much better special effects (lol) and are entertaining in their own right. Maybe he’s no Leonard Nimoy, but I’m especially loving Zachary Quinto’s Spock. I love Quinto’s work in general. He was also magnificent as Sylar on Heroes. (I may be slightly biased because he went to my alma mater.)

Thanks for bearing with me through this Star Trek-infused tangent. Live long and prosper. ;)

Well guys, I hope you enjoyed this little battle between two different Star Treks, and you learned a little something that you didn’t know before!

Stayed tuned in for new Fandom Fridays EVERY Friday.

And check out last week’s post on My Little Pony!

And Don’t forget to enter my EPIC giveaway, in celebration of my blog being ONE YEAR OLD!