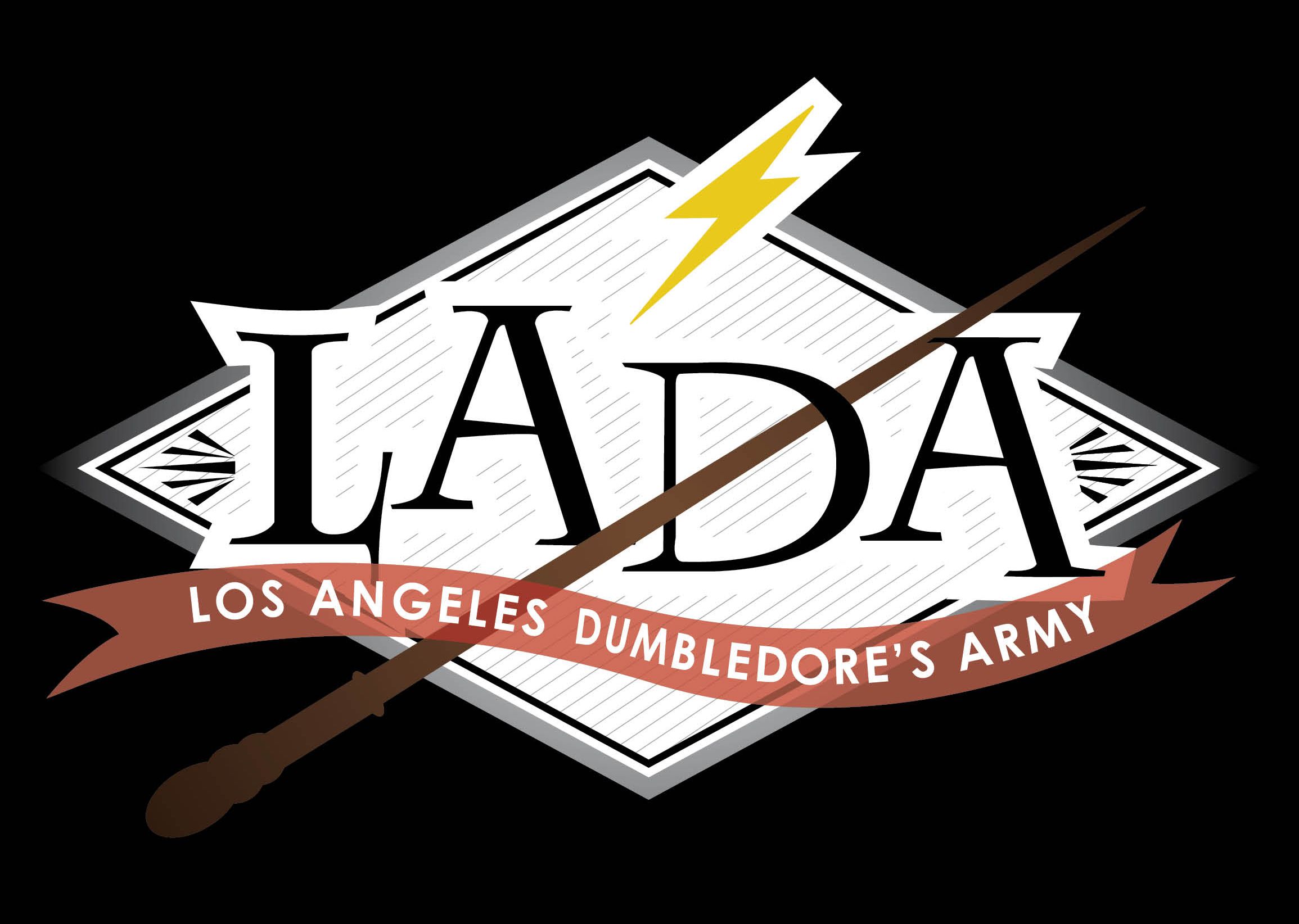 For those of you who do not know (which is probably good chunk of you!), I am part of one of the BEST groups EVER in the history of all groups: The Los Angeles Dumbledore’s Army. We are a 21-and over Los Angeles/Southern California based Harry Potter group. I joined in October of 2011 and have had some of the BEST times with them. So many people associate Harry Potter with children but what they fail to realize is that the kids that read Harry Potter when it first came out (like me), are adults now! And there isn’t much out there geared toward us adults…so voila, the LADA! The group has existed for five years now and has put on some seriously cool events, like Avengers de Mayo (a HUGE party where we went and saw the Avengers and ate superhero themed food and superhero games) and a Hunger Games Capitol party to celebrate the release of Hunger Games last month. We’ve had Quidditch picnics, HP birthday teas, game nights, pub night and pub crawls, Triwizard tournaments, beach days and so much.

But a HUGE event for us is the Harry Potter Roller Skating Night. We held out first one last April, in 2012, and over 650 people showed up! It was fantastic! So, of course, we had to do it again this year, and yesterday, we partied hard at the Moonlight Rollerway in Glendale. 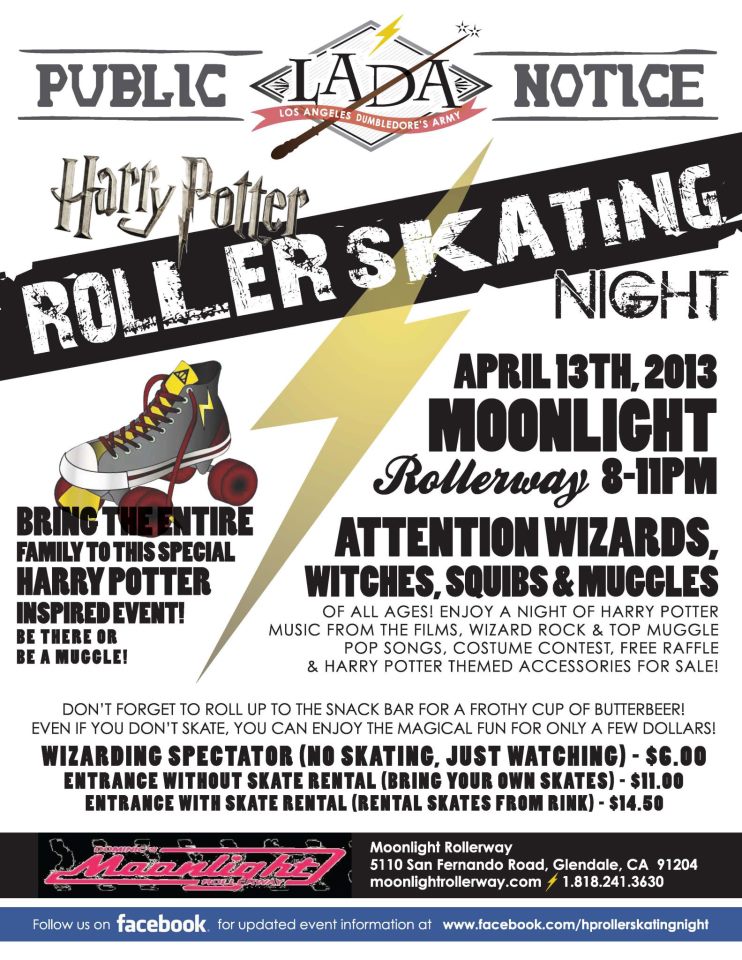 And it was a blast once again! I got my Ravenclaw tie out, put my Ravenclaw bow in, tied on my super awesome Ravenclaw tutu and prepared myself for a seriously awesome night of Harry Potter fun.

There were raffle prizes, and every person who paid to come, whether they were a spectator or a skater, was automatically entered in the raffle. Prizes included all kinds of handmade Harry Potter merch, like bows, cat toys, earrings, Harry Potter candy, and more.

There was a ton of music to skate and dance to, from music familar to us Potterheads from the movies to some Wizard Wrock favorites to top 40 Muggle hits as well. Even though I chose to skip out on the skating this year (last year, I could barely move for days…wasn’t really anxious to do that again haha), I had fun, hanging out with all my friends, and dancing around in my tutu, which got a TON of compliments. Here’s a picture of me, in my tutu.

If you’re interested in purchasing a super awesome tutu like this (in ANY colors, though I do have a ton of Ravenclaw colors left), please leave a comment below or email me at whatanerdgirlsays@gmail.com!

There was also a TON of other super cool stuff to buy as well, like BUTTERBEER!

If you’ve never tried Butterbeer, you are TOTALLY missing out! Its delicious stuff. You can buy it in the bottle by Flying Cauldron here on Amazon.

You could also buy a TON of handmade Harry Potter stuff as well!

This is Miss Tanya, who runs Heroine Habit on Etsy, where she makes all kinds of nerdy themed bows (or any bows, really, she’ll make custom orders!). Here is an example of some of the bows she was selling last night. Also, in the picture above, I’m wearing a Ravenclaw bow she made!

She also just custom made me an Angels bow for me to rock at the baseball games!

Definitely check out her store, she has some of the CUTEST bows and headbands :)

She makes Harry Potter themed candy, and trust me, its delicious stuff. She gave me a Dill Pickle Barrel, basically a root beer barrel but in the flavor of a pickle. Okay, I know that sounds crazy, right? But it was actually SUPER delicious. Here is some of the stuff she was selling last night:

DELICIOUS stuff, check out her Facebook page here to find out when or where or how you can get your hands on some :)

Also, the Los Angeles Dumbledore’s Army was selling some stuff of our own. Last Saturday, we had a massive craft day and made ALL kinds of Harry Potter wares for the event.

Yup, thats a Harry Potter pillow :) I helped to make these, and by helped, I mean I ironed and helped pin and stuffed! But hey, I helped!

We also had a ton of handmade stuff as well, like crocheted little bags in house colors, crocheted hair bows and hair ties. We had house themed earrings and nerdy doggie collars and cat bandanas. We even had SERIOUSLY awesome Harry Potter cat toys (which were tested and approved by my friend Kendall’s cat, Lucius). If you guys are interested in any of these, send a message my way, comment below, and I’ll let you know how to get your hands on them!

Also my mom was there as well, showing off her new dolls as well.

She’s also made Ginny, Neville, Fred and George, and more. She’s also working on making some Doctor Who ones, Hunger Games, Mortal Instruments, etc. and she’s willing to take CUSTOM orders as well, so check out her facebook page, Ellie’s Quirky Creations, HERE.

Oh yeah! There was also SKATING TOO!

It was SO hard to get a clear picture because there were SO many many many people and ya’ll were skating SO fast! But there were a TON of people there, and everyone looked like they were having a great time. There were great costumes: a seriously intimidating Death Eater, a couple cute Hedwigs going around, an entire posse of A Very Potter Musical kids, Sirius Black and tons of people rocking the good ‘ol Hogwarts ties.

Lastly, we had a *secret* special guest, miss Ellie Darcy-Alden, who plays young Lily Evans in Deathly Hallows Part 2. She also had a part in the Doctor Who Christmas Special, The Snowmen. She was a super lovely and sweet girl, and looked like she had a great time as well :)

All in all, it was a GREAT night and I’m sure everyone who attended had a great time, because it looked like they all had a fun time :) I can’t wait til next year ;)

Much thanks goes out to Miss Adrienne, the leader of our group, and to everyone who helped to put this together (hey, that includes me too!). It was a great event and I can’t wait to do it all again next year :)