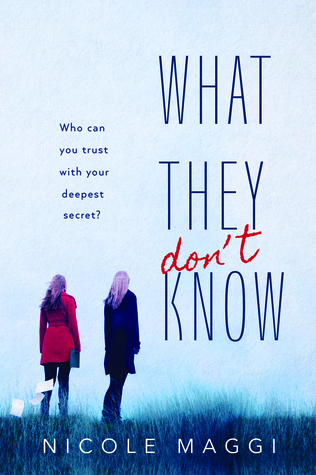 Fairly recently, I did a review (which you can read here) about a book by my dear friend Nicole Maggi. I would normally read anything that Nicole wrote anyway but when she spoke of writing this book a couple years ago, I waited in anticipation of it.

For one thing, it is a friendship story and it rooted in the friendship of two very different girls who are brought together under extreme circumstances. Secondly, it tackles an issue that we often times don’t want to talk about, one that we sweep under the rug, one that makes us uncomfortable, one that we often see in terms of black and white: abortion.

I read this book early. It releases this October from Source Books and I read the entire thing, front to back, in a matter of hours, the moment that I was able to and loved every moment of it, it was such a wonderful novel. I wrote my review and left it at that, ready to promote the hell out of it when it releases in October.

Abortion is important to me, and when I say that, I mean, the right to choose whatever you so please to do with your own body. I don’t want to get into my story because its my story, its personal, it involves people that i don’t necessarily have permission from to share the story, and because I don’t want or need your judgement. But yes, I’ve had an abortion, 8 years ago, when I was 22 years old. You don’t need to know the specifics because its none of your business but I had one. And it was one of the hardest decisions of my life and it was easily the hardest day of my life. There is nothing about it that is fun, there is nothing about it that is easy, and there is nothing about it to enjoy. I hate the day March 17th, St. Patrick’s Day, because of this. But I’ve never ever regretted the decision that I made. It was the best decision that I could make for myself and I’m glad I made. I’ve even more glad that I had the ABILITY to make that CHOICE for myself.

I would never judge anyone based on whether or not they would actually have an abortion. As I said, that’s a choice. But that’s a choice that every single woman in this world deserves. She deserves that choice and she deserves the choice of having a safe, sterile abortion, not a back alley one, with a hanger, where the end result is her bleeding to death – which, yes, is a likely situation if abortions are outlawed.

There are people working every single day to undo Roe vs Wade, or to at least make it as hard as possible, nearly impossible to get a safe abortion. Every single day. And its becoming more and more likely that these people will succeed under the current administration and that breaks my heart, scares me and MAKES ME ANGRY.

What does this have to do with the book you mentioned at the beginning of this post, Sara?

Well, I am so glad you asked.

This book is about two girls, living two different lives, and how they are thrown together when the situation of unwanted pregnancy arises. Mellie is a good girl, living with her incredibly religious family, when she finds out she is pregnant. We are given reason that this is not intended, and that is not because she had consented sex or just forgot to use protection. Lise’s mom is a doctor at a local clinic, in a town that is fairly conservative, where she has to hide what she does, in fear of her own life. They are brought together because Mellie is struggling to make a choice, a choice of keeping a child that she doesn’t want, that would break her heart and that she has no means to take care of or to have an abortion. It is a beautiful story, and it is something that I feel that every person needs to read, whether they’re a teen or not, whether they’re a woman or not, or whether they’re pro-life or pro-choice.

Because here’s the thing: this book doesn’t preach to you. It doesn’t even tell that its wrong to be pro-life. It makes no overtly political standpoints, even with the fairly liberal characters of Lise and her mother. It just tells a story, a story of girl with an unwanted pregnancy and all the obstacles and hurdles in her way of making a decision and carrying out that decision.

What this book does is so hugely important…it gives abortion some humanity. I think people tend to think of it as this bad word. You don’t even hear people say the word often. Its almost as if its a curse word and people tend not to put a human face to it. Its an abomination, its murder and so on. But when you give it a human face, I think that can often change someone’s mind. Not all the time, sure, but it can. I’ve seen the look on people’s faces when they’ve realized that a person they know, a person they thought highly of, a person they liked, that person has had an abortion. I’ve seen it because its been directed my way. I see the way it changes a person, to make it more human.

And I think this book does exactly that. It takes the story and makes it human. It takes it from two points of view, from two very very very different points of view. We see Millie, the conservative girl who grew up thinking that abortion was the worst thing a person could do, and you see Lise, the mother who performs them safely and who has always believed in a choice. The alternating points of views, in journal form, give us an inside, emotional look at the differences in these points of view and how they can still come together when it comes to making a CHOICE. There’s something beautiful in that, something incredibly emotional and real, but most of all, something incredibly necessary about it.

You’ve got some time before this book comes out on October 2nd, but that doesn’t mean it shouldn’t be important and doesn’t mean that you shouldn’t be thinking about it. This book releases just a month before arguably the most important non-presidential election, when big changes need to be made in order to change the direction in which this country is heading, and I think, while this is just a coincidence, I think its an opportune one.

So get this book. No arguments, no excuses, no “maybe someday”. We no longer have time for “someday”. All we have is now and this book is so important and what we do tomorrow, next week, next month is so important. I’ve included as many preorder links as I can below. If you can recommend more places to preorder, please let me know. Do it. Don’t wait. This book should be on your doorsteps and in your hands on October 2nd.