After skipping last year as a small form of protest, I made my way back to YALLWest, one of the biggest young adult literature fests in the country, in Santa Monica. As a writer, I’m still disappointed in the lack of inclusivity to those published by small companies or self published. As a reader and a member of the press, I was impressed by the changes made from the last time I attended. Its still a chaotic day for sure but the chaos has definitely changed from the first two years that I attended. I had a great day and I even met a couple more authors than I had intended. 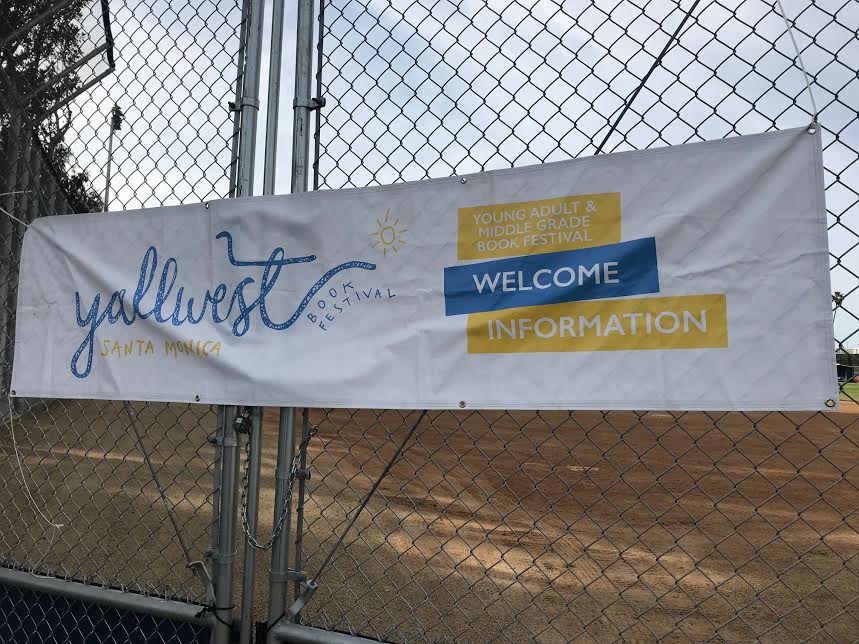 I ended up having a lot of fun at the event but I had a lot of frustration prior to the event. It was scheduled for 6 to 8 pm on the Friday night, which was already difficult enough with normal work hours but totally doable so I made sure to get tickets for myself and Daniel. Then the time got changed to 4 pm and then 330 pm and it was all sorts of confusing and I considered not going. I really wanted to meet Tamora Pierce again though and so we raced there after work and managed to get a wristband for her signing line, though we could not get them for anyone else.

The wristband rules were super weird and I wasn’t a fan. You were limited to only two wristbands. You couldn’t get two wristbands for the 6 pm signings, but you could get two for the 7 pm signings. The only people I wanted were 6 pm authors. It was very weird. 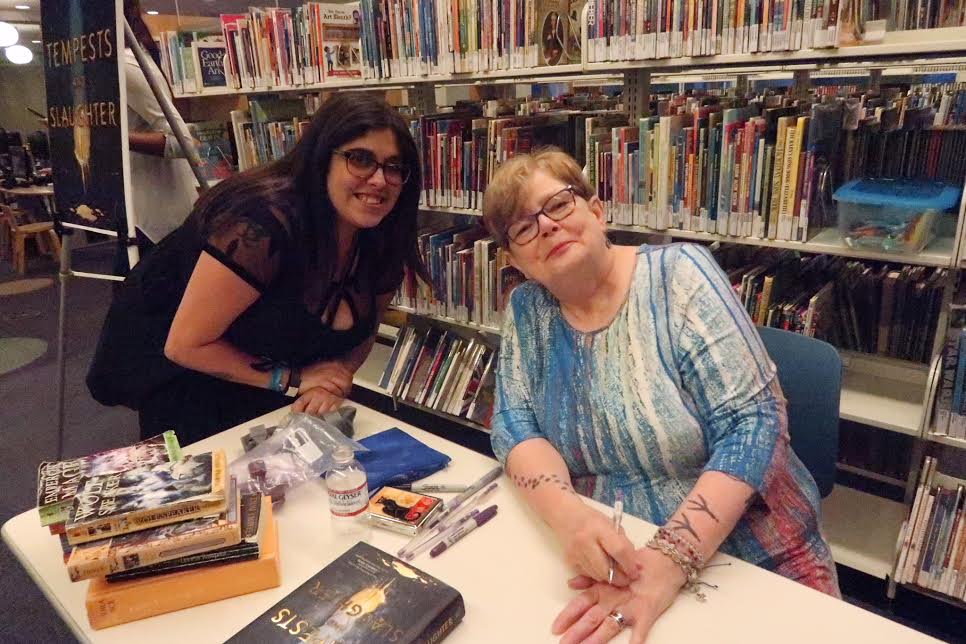 Tamora Pierce, author of many books in the Tortall realm, most recently, Tempest and Slaughter

Tammy was so great to meet again. She’s truly such a talented writer and I wouldn’t have such a love for fantasy if it weren’t for her and I wouldn’t be the writer I am without her. She was super nice and signed all nine books I brought, with the help of Daniel and my best friend, Jade. 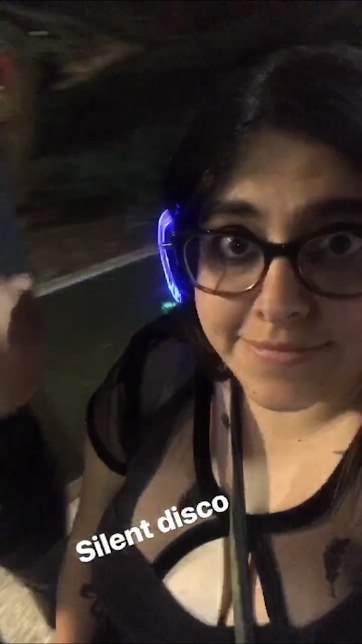 I felt like a goober doing the silent disco and my expression so reflects that!

We also participated in the photo booth, nerdy trivia (which we seriously rocked) and a silent disco. Besides the frustration of the time changing constantly and the weirdness of the wristband handout, I had a great time. I saw my favorite author of all time again and got to hang out with my book friends, who I only really ever see at events like this! 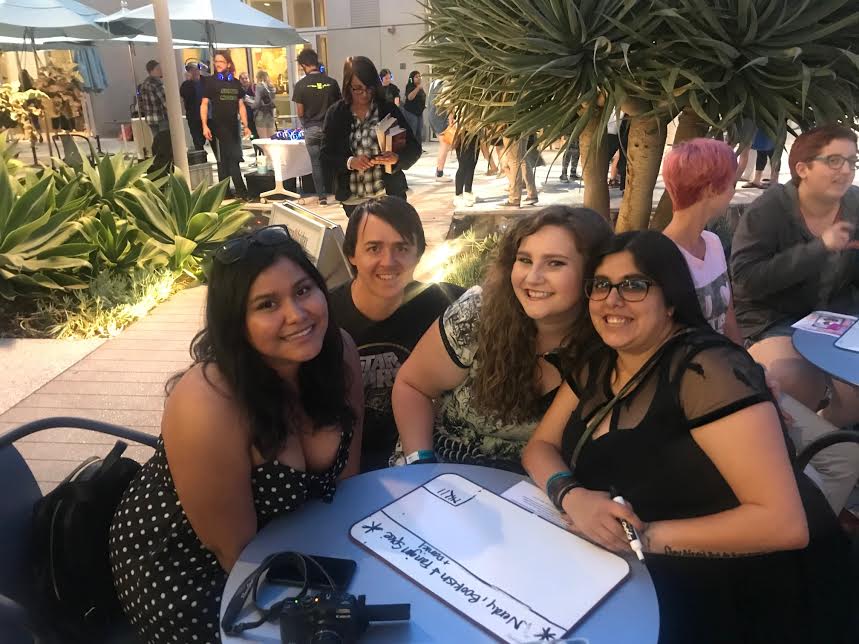 My friend Sarah, my boyfriend Daniel, my best friend Jade and myself at Pop Trivia!

The next day was YALLWest. I was mostly concerned about getting my Marissa Meyer books signed. She’s one of my favorite authors and I didn’t manage to get her the night previously at Fierce Friday so she was my main aim for the day. She was one of the first signings of the day and there was also some swag that I wanted to get my hands on. This is where being press really was a VIP benefit. 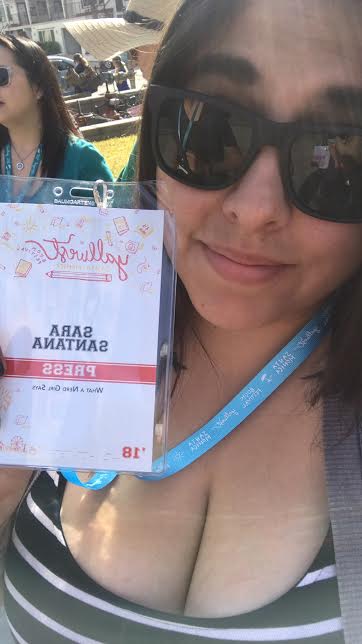 This year, they put a separate VIP entrance for press members. One, we didn’t have to wait in the super epic long line and two, we didn’t have to bypass all the people waiting in the said super epic long line, which always sort of made me feel bad. We got there fairly early so we were near the front and that definitely worked for my advantage. I sent Daniel on a quest to get a wristband for Marissa Meyer and I set out to get my hands on lots of swag and it was GREAT. I beat the crazy crowds and got a lot of awesome stuff, some of it which is going to be used for a giveaway in just one week! 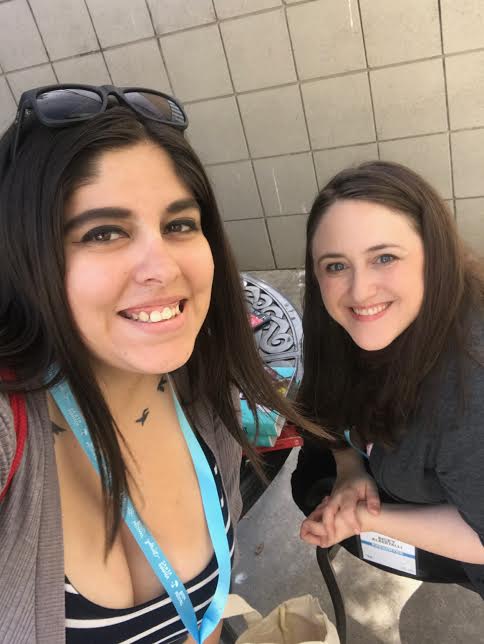 The first person of the day that I was so insanely lucky to meet was Becky Albertalli, author of Simon vs the Homo Sapiens Agenda, The Upside of Unrequited, Leah on the Offbeat, and the upcoming What If It’s Us with Adam Silvera. I was granted an interview with her (which you can read here). She was such a sweetheart, took her time in answering all my questions and signed my books for me as well. I was so glad for that as well, because she had a four hour line later in the day! SO CRAZY! 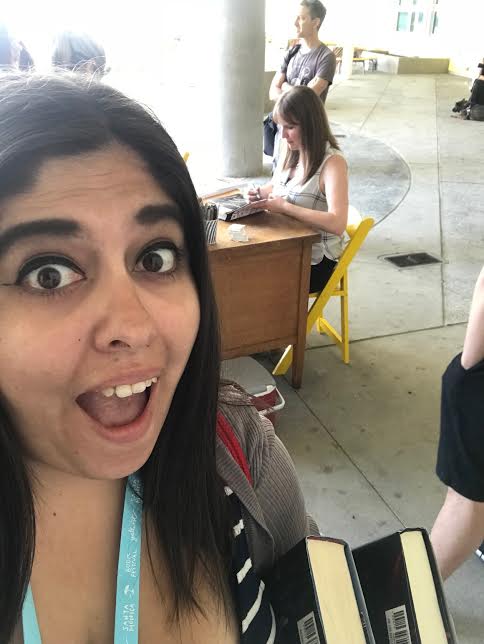 With some careful timing and my awesome boyfriend, we managed to get two wristbands for Marissa Meyer, which meant we could get all my books signed! It is always lovely seeing her and the first 75 people in line got their hands on a limited Renegades poster, so of course, I got my hands on that. I even got an extra one too, that definitely will be appearing in that giveaway I keep mentioning. Daniel got to meet Marissa for the first time too, and he’s in the middle of reading Cress right now. 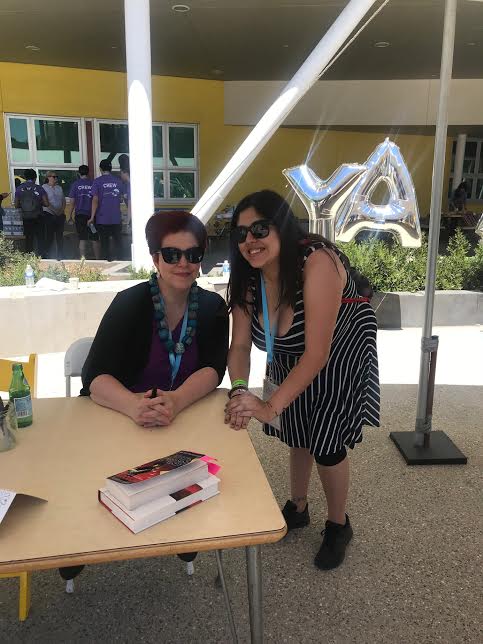 Another author that I had to chance to say hello to was Claudia Gray, who wrote some epic Princess Leia novels for the new canon. I met her a few years ago at Ontario Teen Book Fest and she was super pleasant to meet again. She said it was basically a dream come true to write Leia stories, which I can totally understand! 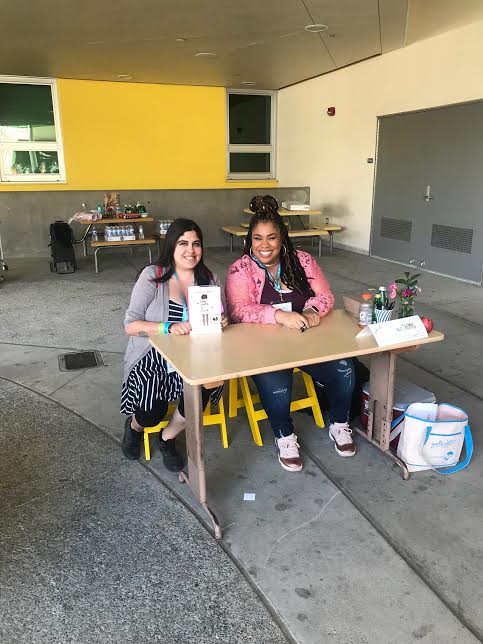 I also was able to meet Angie Thomas for the first time ever and I’m so glad I did. I had read The Hate U Give on ebook, but when I saw her line was not long and she had not yet run out of wristbands, I got my hands on a copy of her book and got in line to meet her. We talked about her being on the NYT Bestsellers list for 61 weeks (and even longer since then) and about the movie coming later this year. She had just seen the first ten minutes the day before and looked so insanely excited about it. 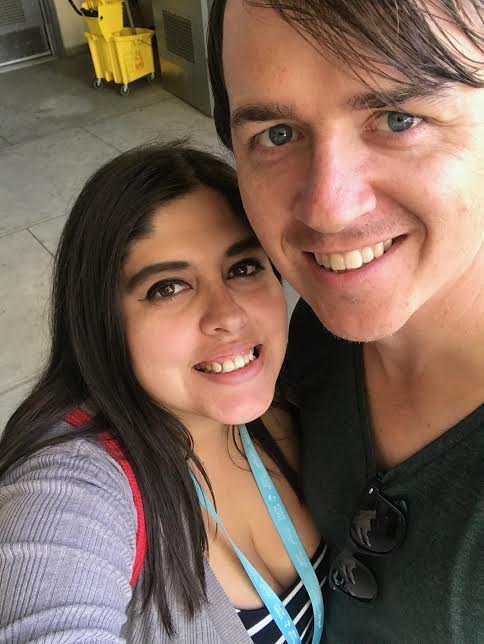 In general, I had a really great time. It was hot and the lines were long but it was so much more organized than it was in the past. The procedure to get wristbands for the autograph signings were WAY more organized than they’ve ever been in the past and it was a welcome change to the mad dash, Hunger Games style of the past. I know I definitely appreciated it. I also really loved the separate entrance for press. It made me feel less guilty about passing all the people in line to get in and it made grabbing swag so much easier than it has been in the past.

I was able to grab lots of tote bags and the Underlined beach towel, which was a MUST for me, and a ton of other swag, including bookmarks and bags and a very bright Penguin Teen t-shirt. There was a lot up for grabs and I was really excited to get my hands on an ARC for The Geography of Lost Things by Jessica Brody (which I’ve already read and loved). There weren’t any other ARCs I wanted, until I found out later that there was one I super wanted but I wasn’t massively disappointed by it.

Ashley Eckstein’s new book even ended up in my hands too, because of a really cool person whose name I didn’t get at the Disney Books booth. We happened to be walking past the backside of the book and noticed ARCs of her book in a box and couldn’t help but squeal “OHMYGOD ITS ASHLEY’S BOOK!” because I’m SUCH a huge Ashley Eckstein fan and the guy who was manning the table took one out of the box and slid it toward me as I was walking by and it was MUCH appreciated! 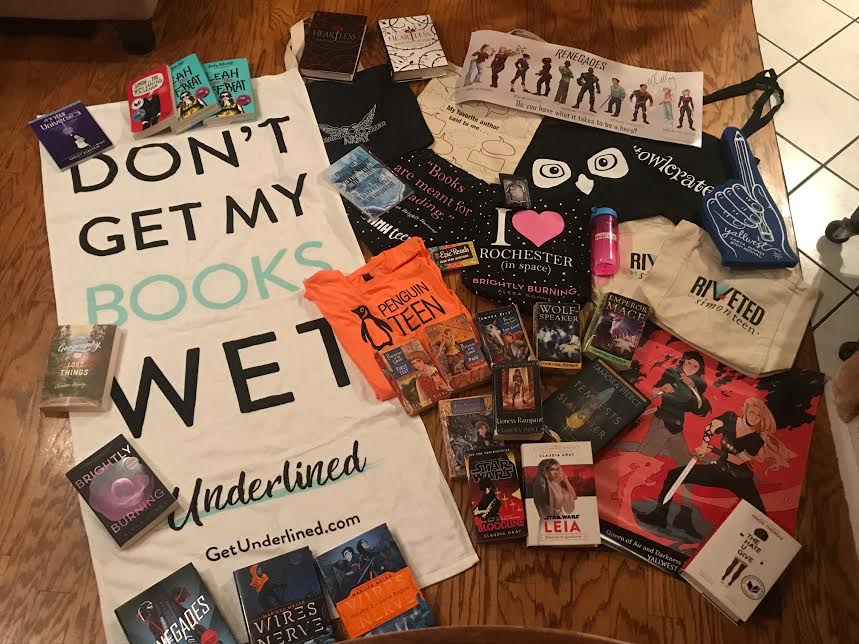 I took a very relaxed approach to the fest this year, instead of running around like a crazy person, and I feel I truly enjoyed it more for that. I was able to say hello to the authors I wanted to, saw a ton of my bookish friends, and collected a fair amount of swag, without feeling overly stressed or anxious, and I honestly think I enjoyed my time this year more than the years previously.

I’m still disappointed in the lack of inclusivity for authors in this fest. The fact that no authors that are published through smaller presses, like, hmm, myself and no self published authors appear seems really unfair and honestly, it feels like a club that I’m not part of and never will be a part of. The fest promotes that YALL Means ALL, and I agree with that on many terms but I believe it will more fully encompass the festival when they allow authors that aren’t published with the major houses to participate. When you have the same names appearing every year, it doesn’t always work.

Angie Thomas was a DOLL and since I didn’t go last year, I was grateful to be able to meet her; her book is truly so wonderful. But she hasn’t put anything new out since last year and so her line was very short, since she also appeared last year. It honestly would be so great for the fest to include a more diverse crop of authors, not just in race and religion and gender and sexual orientation but also in the way they are published. I love this fest as a reader and a blogger but I’m sadly disappointed in it as an author.

As for next year, I believe I may be a year by year attendee, depending on the line up and depending on if they ever change the policy in the way that they handle indie and self published authors. As for this year, I had an enjoyable time and hope that the changes they made for this year’s fest will continue on into the future.