The Top Ten Tuesday is a weekly challenge post previously hosted by The Broke and Bookish and now hosted by The Artsy Reader Girl. You can follow along for each weekly post here. This week’s post was a freebie and I honestly had a really hard time coming up with something! So I decided it would be fun to do a throwback to one of my old TTTs from 2013! I’m going to try to keep this to books only, which I did not do in 2013!

Percy and Annabeth – The Mark of Athena “You Dropped This” Scene 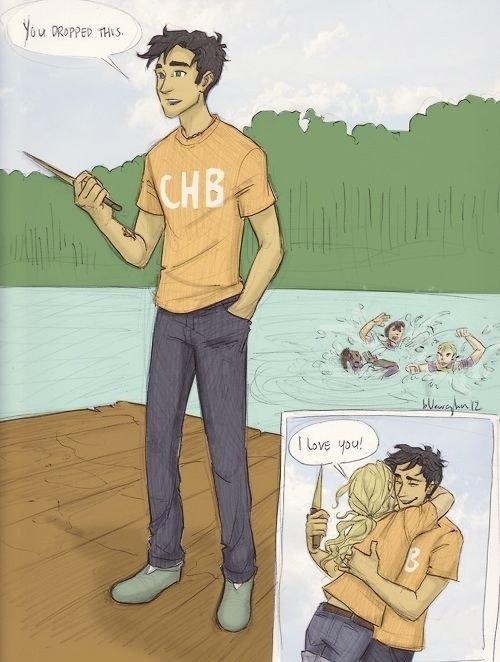 This scene is one of my favorites because of how genuinely sweet it is. There is something magical and sweet and long lasting about Percy and Annabeth and I will ship them forever.

All around the Romans, Charleston Harbor erupted like a Las Vegas fountain putting on a show. When the wall of seawater subsided, the three Romans were in the bay, spluttering and frantically trying to stay afloat in their armor. Percy stood on the dock, holding Annabeth’s dagger.
“You dropped this,” he said, totally poker-faced.”

I will go down with this ship. They get married. They have twins. They’re together forever and no second movie will ever convince me of anything different, EVER. That being said, when they reunite in book ten and have that sexy make out scene on the carriage through Central Park and you just know that Michael still madly in love with her…ugh, I get butterflies just thinking about it.

“Mia,” he said, looking down at me with his dark eyes filled with something I was almost afraid to put a name to, and his chest going all up and down like he’d just been runnin. His hands were in my hair. He was cradling my head. ‘You have to know. You have to know I lo-‘”

The pent-up sexual tension between the two of them lasts the entire book and I was practically panting at the end for them to just go for it and they finally do and their chemistry is so damn hot that it causes Katy’s laptop to literally explode. My. God.

“His hands slid around my head, pulling me back to his mouth. There was a cracking sound in the house. A fissure of electricity shot through the room. Something smoked. I didn’t care.”

Everything about this scene is just magical and hilarious and SWOON. They literally have their first physical encounters by trying to raise their heart rate, as a game, since the two of them are so damn competitive. Its so sweet and innocent but also seriously hot as well. UGH. I love these two.

“It was both terrifying and glorious in it’s intensity. It was love.”

There are literally a ton of amazing scenes with Tris and Four but truly, this one is my favorite. I think this is where they both share more of who they are as people. I think this is truly the moment that Four falls in love with Tris.

“I have something I need to tell you,” he says. I run my fingers along the tendons in his hands and look back at him. “I might be in love with you.” He smiles a little. “I’m waiting until I’m sure to tell you, though.”

“That’s sensible of you,” I say, smiling too. “We should find some paper so you can make a list or a chart or something.”

I feel his laughter against my side, his nose sliding along my jaw, his lips pressing my ear. “Maybe I’m already sure,” he says, “and I just don’t want to frighten you.”

I laugh a little. “Then you should know better.”

This is one of the most goddamn sexiest scenes I’ve ever read in a book ever and it doesn’t even matter that its basically supposed incest at this point. Its the moment where you know there is no moving forward for Clary and Simon because of how much Clary and Jace truly love each other. Its full of so much love and desire but also anguish and hurt. I love this scene so much.

“His mouth came down on hers. And that was it. All the self-control he’d exerted over the past weeks went, like water crashing through a broken dam. Her arms came up around his neck and he pulled her against him… His hands flattened against her back… and she was up on the tips of her toes, kissing him as fiercely as he was kissing her… He clung to her more tightly, knotting his hands in her hair, trying to tell her, with the press of his mouth on hers, all the things he could never say out loud…”

Nothing is as beautiful as my Cress and my Thorne and their relationship was a beautiful slow burn until it culminated into this sexy, sexy scene that still makes me swoon just thinking about it. Thorne’s charm, Cress’s naivety – both of their love for each other. I. Can’t. Handle. It.

“Captain?”
“Cress.”
She couldn’t not say it, although she realized he was right.It was sort of scary. Much scarier than it had been the first time she’d told him, out in the desert. It was different now. It was real. “I’m in love with you.”

He chuckled. “I should hope so, after all that.” He leaned forward and pressed a kiss against her temple. “And I love you too.”

Cath and Levi Reading The Outsiders in Fangirl I think everything about Cath and Levi is so relatable, so sweet, so wonderful but the scene where Cath spends an entire night reading The Outsiders to Levi and they cuddle and kiss and eventually fall asleep together might be the cutest, most romantic thing on the entire planet.

“I like your glasses,” he said. “I like your Simon Snow T-shirts. I like that you don’t smile at everyone, because then, when you smile at me.… Cather.” He kissed her mouth. “Look at me. I choose you over everyone.” 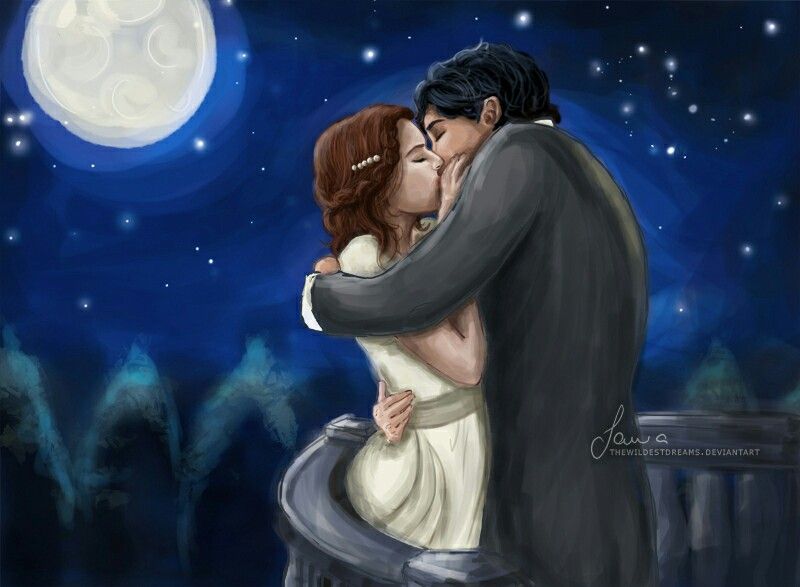 Part of what makes this scene so wonderful is that its Victorian England and you don’t judge grab someone and kiss them the way Will kisses Tessa at this point so there’s that aspect of it. But its also Will finally giving into his feelings for Tessa and, yes, sure, he’s under the influence, but its FINE, because his true feelings are coming out and its such a breathless, amazing scene.

“He bent to put his cheek against hers. His breath against her ear made her shudder with each deliberately spoken word. “I have wanted to do this,” he said, “every moment of every hour of every day that I have been with you since the day I met you. But you know. You must know. Don’t you?”

Jace and Clary – City of Glass I Love You Scene

I love this scene from the bottom of my romantic heart. Its so beautiful when Jace says this and fuck, I’m so glad Jace is the first one to say it because I think it makes the moment even better, even sweeter, even grander. Jace and Clary are my favorite book couple and this moment will forever make me swoon, bring tears to my eyes, make me smile and make me squeal.

“There is no pretending,” Jace said with absolute clarity. “I love you, and I will love you until I die, and if there is life after that, I’ll love you then.”