I grew up a PlayStation kid.

Besides playing the early Pokemon games on my brother’s GameBoy that I begged him to borrow all the time until I got my own, our family never owned any other system. We grew up relatively poor so we never had any of the systems that existed when I was really young, like the Super Nintendo, and our first console was the original PlayStation, which was originally bought because my dad really liked Resident Evil, which is where my own love for the franchise came from. We got the PlayStation 2 as a gift for Christmas or something like that and then I’ve personally owned both the PlayStation 3 and 4. Perhaps I’ll own a 5 at some point but…well I’m not holding my breath for anytime soon haha.

Because of this, my knowledge and interaction with games that were NOT Sony games is very limited. I remember playing some games at my cousins’ houses growing up and I distinctly remember playing the Nintendo 64 at the house of a rich family I babysat for in middle school, after the kids had been put to bed. I’ve played Mario Kart and Super Smash Bros because of the party aspect of it but honestly, that’s about it! Now, I’m a huge nerd and go to conventions and follow all different people and brands on social media so there are fandoms out there that I’m aware of and have some knowledge on but when it comes to Nintendo, I’ll admit my knowledge is basically nonexistent.

My husband, Daniel, on the other hand, is a huge Nintendo fan. We purchased a Switch a few years ago and its definitely something that he uses more than I do. He grew up playing Nintendo games and is a huge fan and has a lot of respect for the company and the things they’ve created. 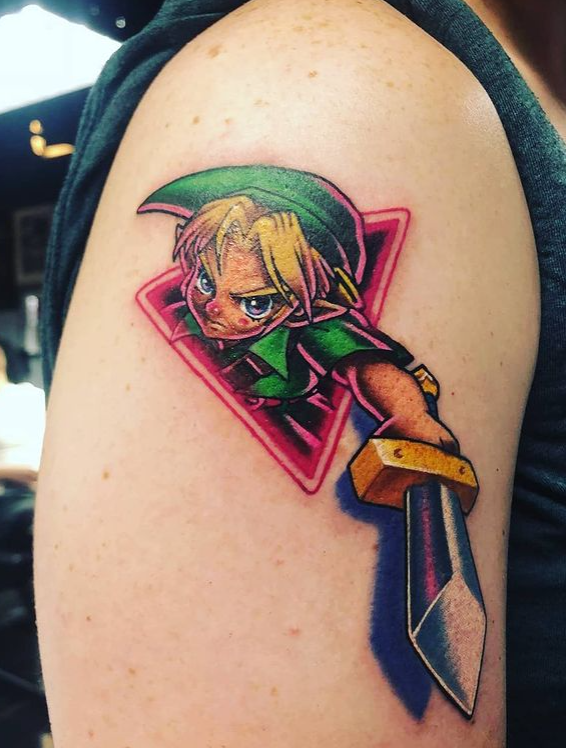 He is especially a huge fan of The Legend of Zelda. This is something I’ve known for ages and I love happy and excited he gets when literally anything related to the franchise is mentioned. He has a tattoo of young Link on his arm that he loves. I have basic knowledge of the games, basically things I’ve picked up over the internet like knowing that Zelda is the princess and the main character’s name is Link. I recognize the Hylian shield and the master sword and I have heard the names of the games like Ocarina of Time, Twilight Princess and so on. I’ve seen the quote “its dangerous to go alone!” everywhere. But I have no real experience with it and its always made me a little sad since its something that is so important to him!

Fairly recently, Nintendo started making older games available on the Switch and I know Daniel got very excited about this. For one thing, he was able to play these games again and for another, he was finally able to share them with me for the first time. I love video games but I’m not very good at them – I’m slow and it takes me much longer to get through them than most people – I love to watch other people play them. We did an entire play through of Ocarina of Time and are currently making our way through Majora’s Mask, which is his favorite.

And guys, I love it. I love it so much. I know that I’m like 30 years late on this fandom but I absolutely love it and am enjoying it so much. Its everything that I love in a story and I probably would have always loved it but I just never had the opportunity to! 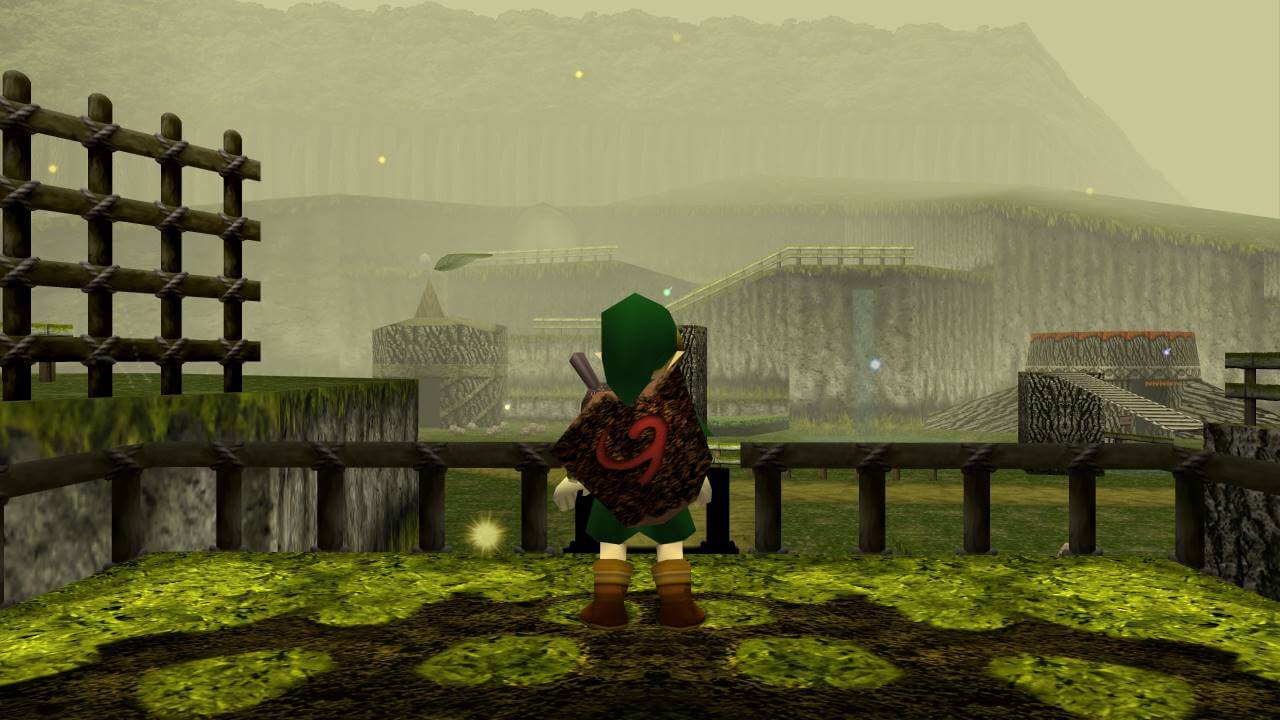 I absolutely loved everything about Ocarina of Time. Admittedly, I haven’t experience the many, many games in this franchise but I can see why this one is so popular and tends to be a favorite. I loved it from beginning to end.  It’s a fairly old game, releasing in 1998, and it does look like it, especially when you compare it to the way video games look nowadays. But that game holds up and even with old school, 90s artwork and graphics, its absolutely beautiful and I can see why this game is still so loved. When I try to think of words to describe the game, the words beautiful and gorgeous come to mind because its just so true.

I really enjoyed the story, especially the hero’s journey and time travel aspect of it. I fell in love with Link as a character so quickly. I’m usually not one to get sentimentally attached to male characters – I’m all about the badass women – but I adored Link from the start. I loved the adventure of it and the different cultures. I thought the story was so interesting, finding all the different sages to come together to defeat Ganondorf. The mythology  of the world and the cultures created – its such beautiful storytelling and amazing worldbuilding. I found it all so fascinating and I was hooked because I constantly wanted to know more. People will say that video games are mindless and have no substance and I would point those people straight to this game because of how much substance it  has.

Honestly, I wish there was novelization of the game because I loved the story so much that I wish I could experience it again and again and again. I was absolutely fascinated. It was everything that I love about young adult stories and fantasy and adventure stories in a video game and I couldn’t believe I was finally experiencing it, that I had been missing out on it this entire time. 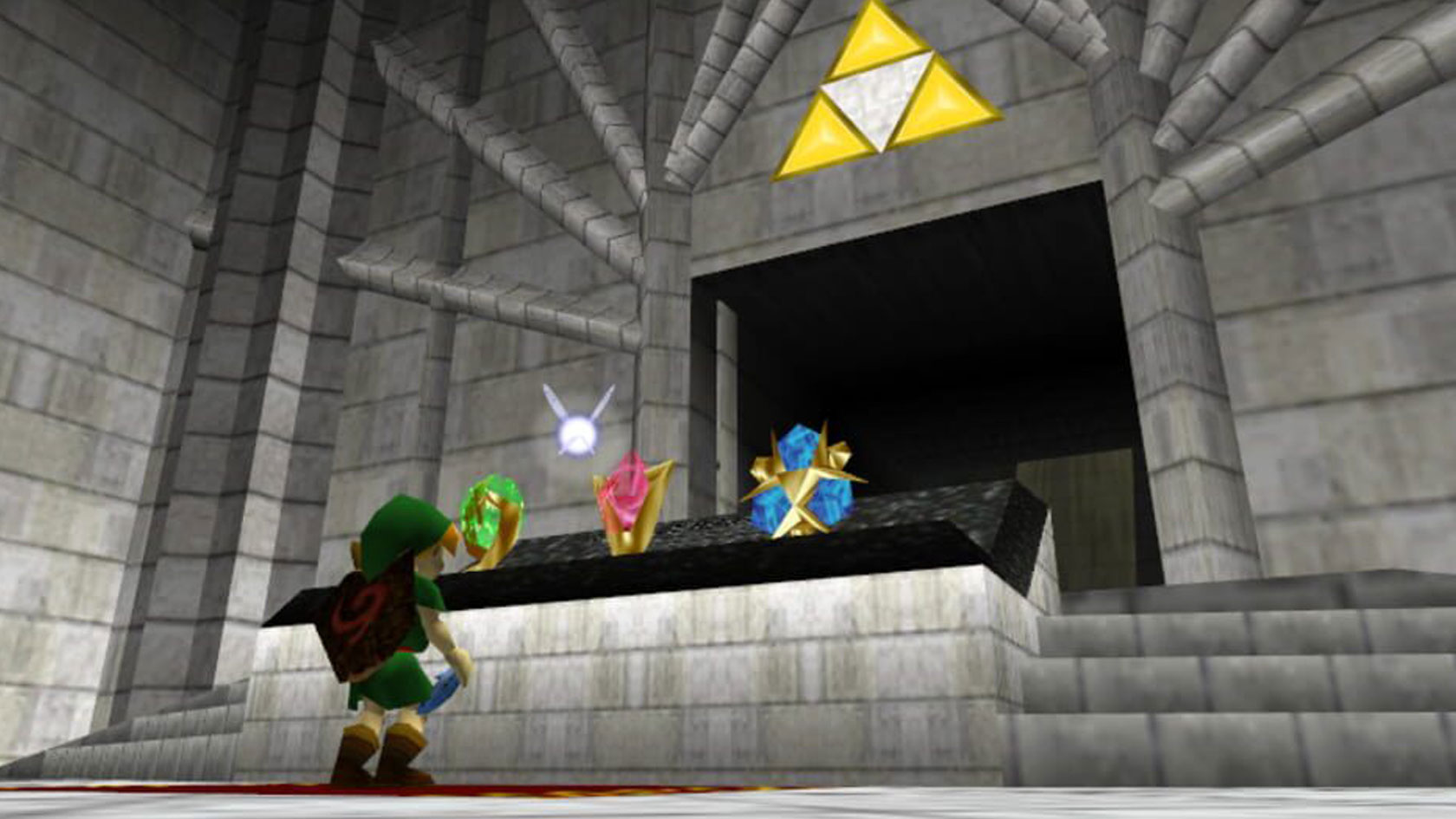 What I think…well, my instinct is to say what I loved the most but is probably more accurately described as to what really resonated with me the most was the music. I go back to that archaic idea that video games are nonsense and I, again, come to this game again. The music in this game is nothing short of pure artwork. The music rose and fell as the game rose and fell. It created anxiety and excitement and so much pure emotion. Anytime I really felt something while experiencing the game, it was because the combination of the story and the music was so perfect that I just FELT it all. I could sit there all day and have Link play the ocarina because the music is so beautiful. I’ll admit it – I’ve played it a few times when I’ve been experiencing a lot of anxiety because I just love it so much. The Minuet of Forest and Saria’s Song are absolutely my favorite.

Right now, we are currently working our way through Majora’s Mask, the sequel to Ocarina of Time and Daniel’s favorite video game of all time and I’m super enjoying it as well. It’s definitely different – darker and less hero’s journey than Ocarina, but I still love the story and I love the time travel aspect. It can be confusing and sometimes I need Daniel to explain to me what the heck is going on but I love it. I love the many threads of it and the many masks that you collect through out the game because they all come with their own separate story and adventure and they all come together and I can’t wait to see where it goes from here.

I know that I am SO super late to the game but honestly, I am so glad that I finally made it. I’m getting to enjoy something that means a lot to my husband and I know that he has been getting a lot of joy in showing it to me. But I’ve also just enjoyed as an individual person. I think this was something that I would have thoroughly enjoyed and become super obsessed with as a kid or teenager but I’m glad that I am finally getting to experience it and love it.

And if it gives me a brand new obsession – which looks to be true – well, then so be it.