I have a lot of feelings right now.

I am a Los Angeles girl. Now, okay, I may have been raised and lived in Orange County for most of my life but I am an LA girl at heart. I was born in Whittier and lived in La Habra my entire life, at the northern tip of Orange County. I never felt like an Orange County girl because La Habra really isn’t the same as the rest of the county and its lumped into Los Angeles a lot. Plus I have spent a lot of time in Los Angeles my entire life. I remember cruising down Hollywood Blvd with my dad, eating hot dogs at Pink’s, hanging out with my family at the Observatory, attending many book events at the Grove in LA, going to concerts at the Fonda and the Troubadour, the Viper Room and the long gone House of Blues on Sunset. Los Angeles is home to me.

One of the places I used to spend so much time at was Amoeba Records in Hollywood, off of Sunset Blvd, near the cross street of Cahuenga. My ex-boyfriend is really the one who introduced me to the place – he collected vinyl records – but I fell in love with it and continued to go as much as I could over the years. I mostly went to grab movies, since, yes, even in 2021, I do like to collect physical editions of movies. I have found some of my favorite special editions and box sets from Amoeba. I loved getting lost in there and I loved being upstairs, looking at movies or sometimes just looking over the railing to the first floor, where tons of people would be browsing through the music sections. You find the most eclectic group of people at Amoeba. I’ve seen live bands there, attended signings and met a fair amount of famous musicians and celebrities, roaming through the record bins, just like everyone else.

When Amoeba announced they could no longer stay at the location on Sunset where they’d been for so long, it was SO devastating. It felt so iconic to be in that spot for so long and I think a lot of people wondered whether they’d be able to reopen at all. Of course, they stuck to it and they are now in a new location off of Hollywood Blvd, near the Pantages Theatre and Funko Pop store, not far from their original location. I have yet to visit but hope to very soon.

Just a few days ago now, Arclight Theaters just announced they’d be closing for good – they just couldn’t hold out after months of closure due to the pandemic. They aren’t as large as, say, Regal or AMC theaters – in fact, I don’t think there are any Arclight theaters anywhere near where I live – I always go to LA to see a movie at an Arclight, most often the one in Hollywood, off of Sunset, just mere steps away from where Amoeba used to be. That theater was an iconic spot off that street – you can’t miss the large, white, patterned dome of the Cinerama theater as you drive by. I’ve seen SO many movies there, mostly premieres and indie movies that were hard to find at mainstream theaters.

I have a super special place in my heart for the Cinerama Dome because it was the first place where I waited in line for a movie premiere, which ended up being one of the best experiences of my life. Regardless of the lack of success that the Mortal Instruments movie had (and frankly, for good reason), I had such a blast at that premiere. I adored all of the cast and the brains behind the movie – they were all so nice and really gave it their all for this movie and for the fans – and I have a huge tie to this theater because of that. It is such a GREAT memory and it breaks my heart to know that this theater will be closing and the future of the dome is sort of unknown at this point. 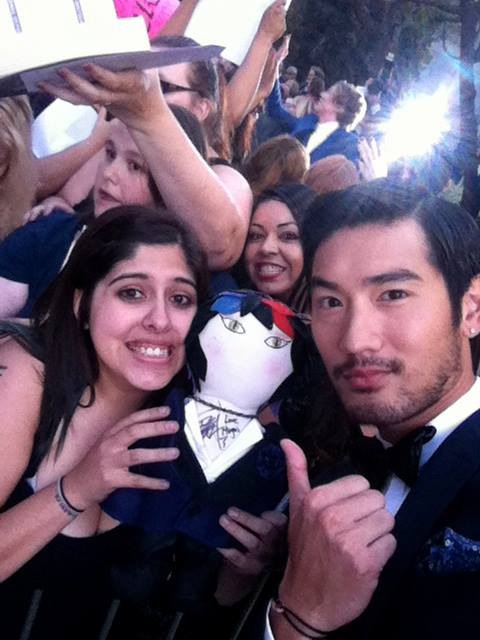 The Mortal Instruments: City of Bones Premiere, August 2013, with Godfrey Gao, who played Magnus Bane. Godfrey unfortunately passed away in 2019

Most people are saying its highly likely that whatever happens to the space, whether it gets sold to a different movie theater company or whatnot, the dome will remain. Hopefully. Probably. But there’s no guarantee. SOOOO many people are already talking about saving the dome. So many premieres have been held there over a long period of time and its an iconic not just to the city of Hollywood and the county of Los Angeles, the history of California, but also the history of film. To not have that dome there, to actually get rid of it and demolish it would be honestly so tragic.

So for now, the status of the Dome is up in the air. The news of Arclight shutting its doors is brand new so no one really knows much of anything at the moment. But the idea of the dome being gone and Amoeba being moved elsewhere – it just sort of makes me sad. Don’t get me wrong – I’m not fully against change and I AM happy that Amoeba remains open, albeit in a different location. I just have a lot of feelings knowing that next time I cruise down Sunset Blvd, it just might not look the way I’m so used to and it makes me sad and nostalgic. Here’s to hoping that the dome remains, keeping at least one familiar part of that street intact.